Haha wow what a title!! Haha.

There’s actually a few things to discuss in this post but there are pictures too. I try not to waffle on too much or make my posts too wordy but, ironically, I do like to write and besides it’s my blog so shut your pie holes.

Firstly, let me tell you a little about Finem Mortourum.

What the CRAP is that? I hear you bellow in a Viking type voice, hey it’s my imagination Mkaaayyy… 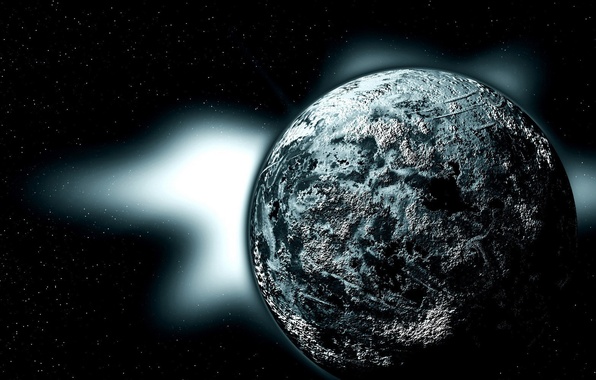 Finem Mortourum is a lost planet. It’s not on any chart or historical scrolls you’ll find but it is inhabited.

All manner of unholy, holy, pure, evil, monstrous, militant, bionic, undead things live on Finem Mortourum. How they got there is unclear.

The World is twelve times the size of our home planet (wherever that may be for you) and has a similar eco system albeit a lot more GRIMM.

Look basically guys I needed one planet where all my own weird and wonderful creations could reside haha. It’s a work in progress but pretty much every army and/or model I’ve ever posted on this blog shares a small section of this planet I’ve invented. Mind Blown Yeah? Haha well maybe not quite but look it works for my mind to have one big place for all my miniature friends to hang out, wage war on each other and generally cause a lot of mischief.

As mentioned it’s still a work in progress of which I hope to have a lot more details (fluff) on over the next few years and beyond. Like any good world it will evolve.

So if you’re a little lost or bewildered I’ll give you some examples:

One of the factions on Finem Mortourum is, actually, a combination of three separate factions.

I call the faction…

The Warmongers joined forces in the fourth great civil war of Finem Mortourum.

Realising each army was too small to have any real impact on any other faction they joined forces. Needless to say the first alliance was tense because there was a long history of feuding, pillaging and killing from all three armies.

Now, nearly sixteen years later, the truce has remained solid and even though there are the occasional murders and some torturing the three clans stick together in relative peace.

Each army brings their own skills and flair to the alliance.

The Blood Rain Cultists are many in number and seem to have no fear at all. They will run head first into battle no questions asked.

The Korsch Klan (Techno Barbarians) are few in number but each warrior is so brutal and so skilled it’s like fighting ten men. They are also expert trackers and hunters.

The Albino Ork Blud Lettas are quite dim in a lot of ways but their skills with engines and mechanics is unquestionable. They can make something out of nothing even if it is weak in structure it will still pack a punch and inflict a lot of damage on the enemy. They are also fierce warriors.

The Alliance lives by three simple rules or guidelines:

1. The spoils of War are divided equally. If there is a quarrel over an item or slave the individuals in disagreement must fight to the death.

2. If no spoils are taken from battle and there is no food to be had straws are drawn to see which faction must sacrifice one of their own to be eaten.

3. If there is a disagreement under any other circumstances they must fight to the death.

The Alliance mostly dwell in the Eastern Bad Lands of Finem Mortourum but they will venture as far as the Blood Field Cities of the west.

Their impressive motorcade, made up of cars, buggys, trucks and bikes, stretches for miles when they set off on hunting/pillaging pilgrimage

General Volke is the leader of the Blood Rain Cultists

Now, I recently acquired some Goliaths from the brand new Necromunda range and WOW these models are so cool. I decided, as I will never play the game, to absorb them into my Warmongers Faction. I feel they lean more towards the look and feel of Techno Barbarians.

Here is what I’ve made thus far…

The arms were a bastard to get right and I used the dark angels bike handle bars instead of the Ork one due to distance. I didn’t adjust the legs so he looks a bit rigid but, generally, I’m quite pleased with how he turned out. Two more Necro Bikers to come. Great Head/Mask.

Some of you may have seen the post I did yesterday about the Beastclaw. Well the head for the dead body that is hanging was too cool and unique to use for a cadaver so I used him on this guy below instead.

I love this guy.

He’s standing on some old weights for a kitchen scale. They llok a bit like Pork Pies in B&W. Mmm Pork Pies. They’re not the same here as in the U.K. I left England when I was 7 but STILL remember how glorious a Pork Pie was. Drool. 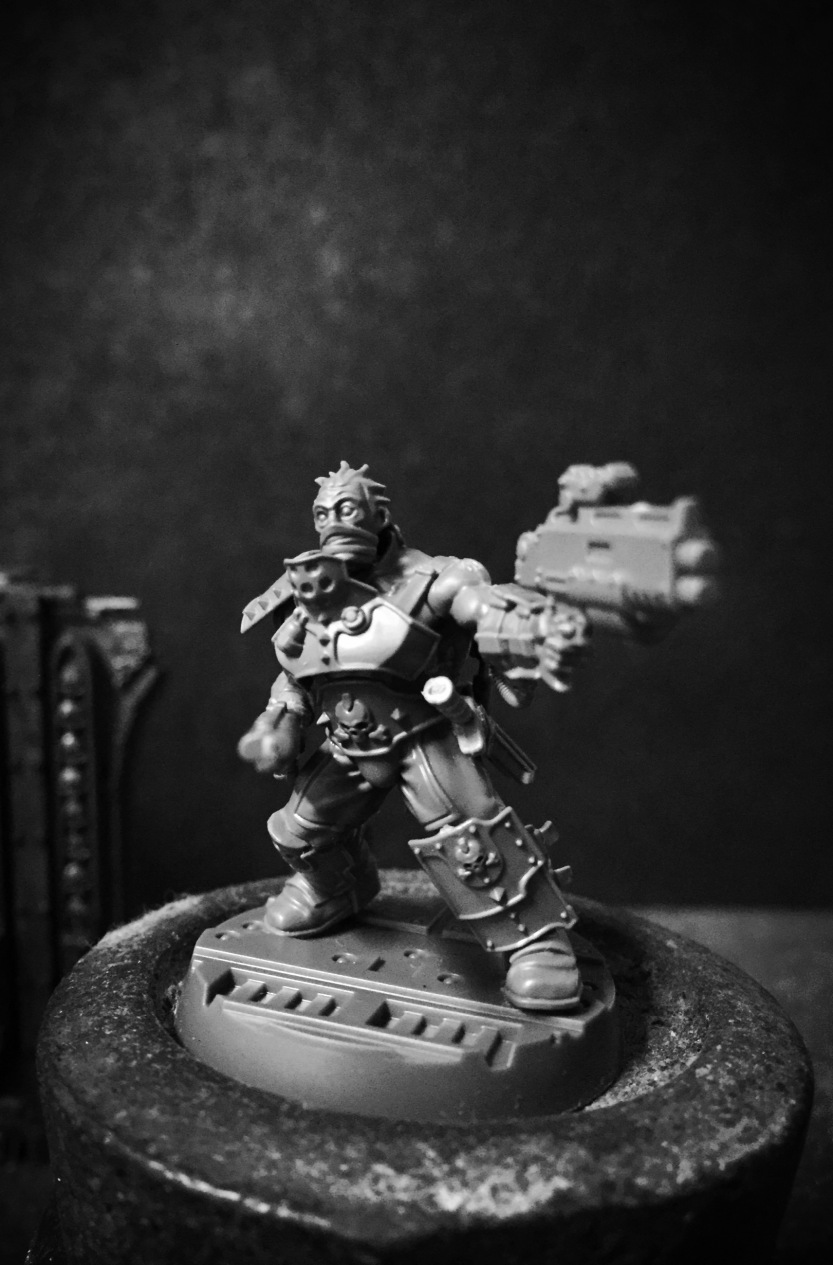 This next guy, as you can see, is weilding a large hammer weapon. In the Goliath kit this hammer is stuck to an arm intended to look like it’s leaning against a shoulder. However the weapon is far too cool not to be held like the holder is going to do some serious damage with it so…

I stayed with the Goliath Mohawk look but went with a Space Wolf Mohawk head. Works for me.

After seeing some preview images of Necromunda Orlocks coming early 2018 I was inspired to give one of my dudes a big gun. 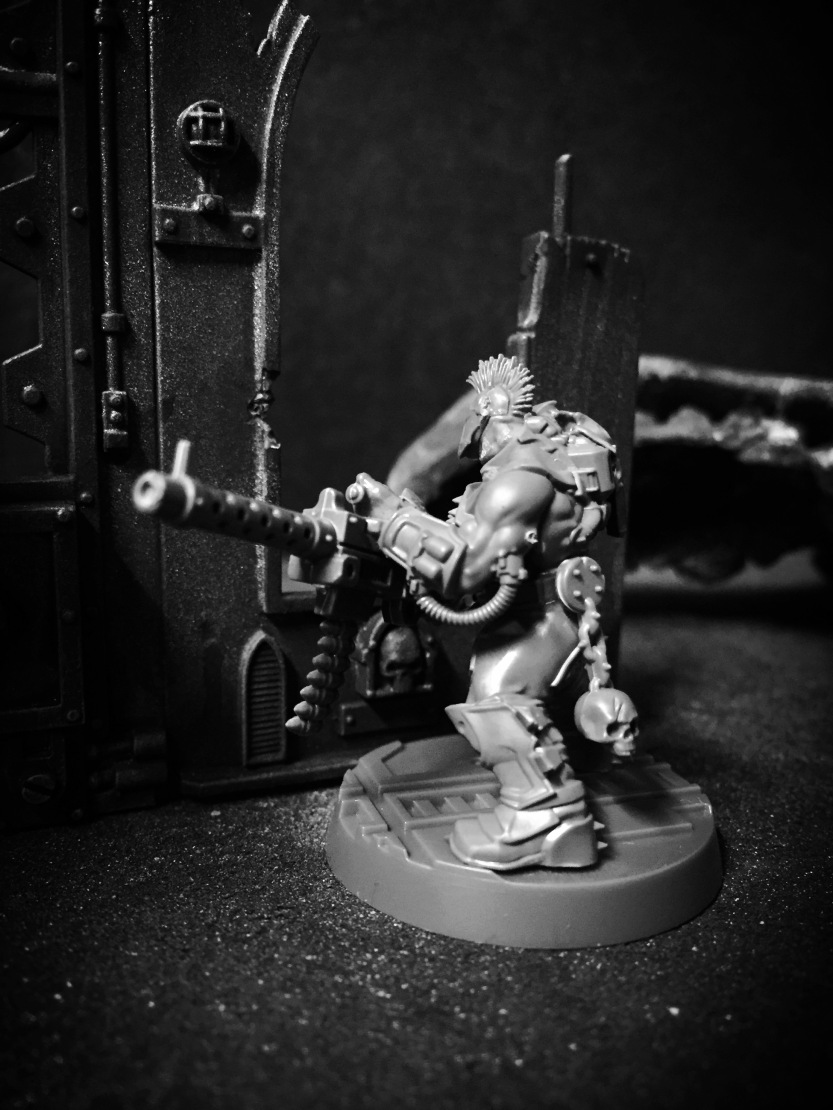 The right shoulder had a huge gap due to the angle of the arm so I used an Ork armour plate as well as a weird bird skull to hide the gap. Looks a bit chunky but passable.

This next chap is very Techo Barbarian. His neck looks a little elongated but I think that adds to his maniacal vibe hehe. 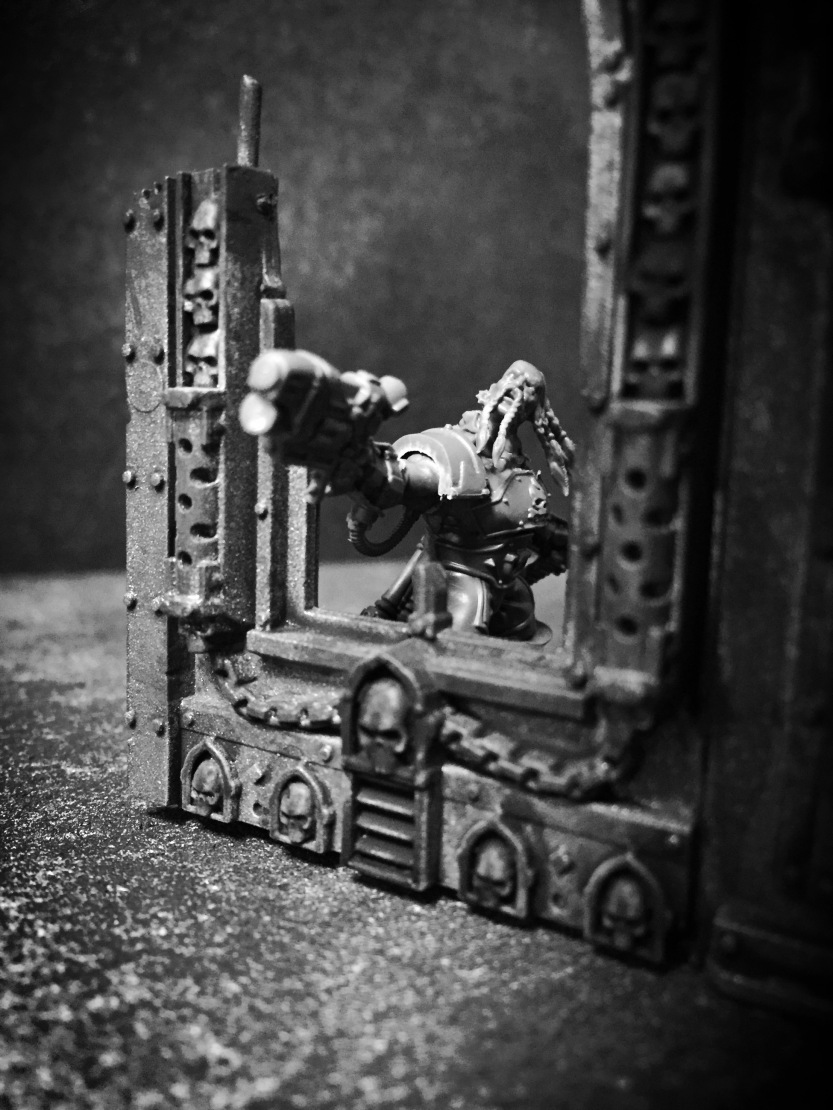 I love this guy. He really isn’t Necro at all haha he looks Freakin Mean Man!! Like some kind of Grim Dark Gladiator or Pit Fighter.

The next two are straight up, as instructed, Goliaths which are just so damn super cool.

That’s a total of eight so expect twelve more including two more bikers.

If anyone has of these and wants to sell it or if they know where I can get one cheaper than what FW sell it for please let me know. Cheers.

Thanks for reading my good people.

Be good to your concubines and remember if it’s raining upside down you might be doing a hand-stand.

I bet that’s got ya thinking aye?

53 thoughts on “The Warmongers Necromunda Reinforcements which is all part of the broader plan.”