I’m bored waiting for the kids to finish school so I thought I’d do a non hobby related post. I do these from time to time. It takes me back to MySpace days haha. Whatever happened to MySpace? Facebook happened I guess. I was on FB for a while but was forever in trouble haha. I’m not what you’d call politically correct so whatevs!

Ive reached a point now where I’ve lost count of how many tattoos I have. I think it’s thirty now at least. My most recent one is this one. 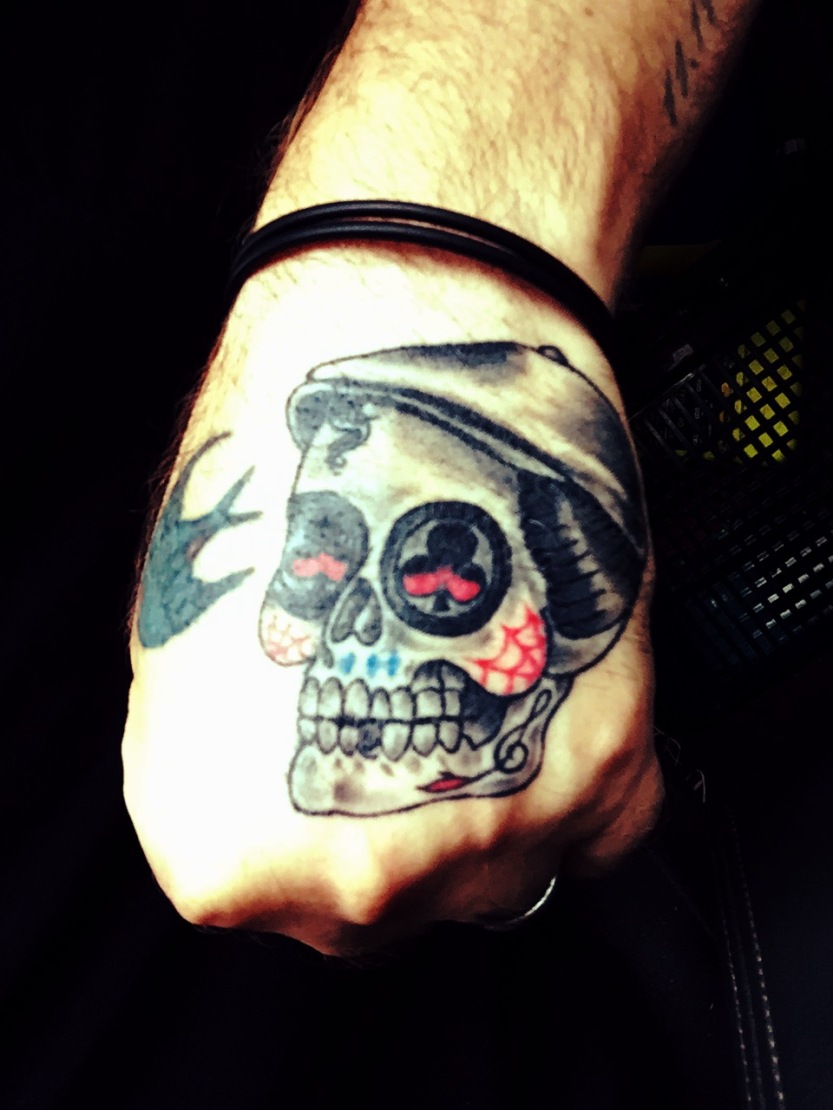 It’s my second hand tattoo. The first was a swallow you can just see on the same hand.

When I got the swallow tattoo I had to sign something saying I understand that it’s a hand tattoo. Derrr.

Tattoos are more accepted than ever before but I think it’s still going to be a while before neck and hand and face tattoos are completely accepted. I always tell people who object to tattoos that the only difference between us is that I don’t judge them for NOT having tattoos. Then I tell them to suck my balls haha. Nah.

People look at my tattoos all the time. Some with curiosity in their eyes and others with, what looks like disdain. I don’t offend easy and I’ve never been bothered by what people think of me. I must say though I do get a kick out of teaching people a lesson. They judge me by the way I look. I’m 6ft 2″ big, solid, shaved head and tattooed haha. Then we get chatting and they realise I’m quite a lovely fellow haha.

Once I was managing a showroom and a little old lady came in, looked at me and walked straight back out haha. She came in again later and I could tell she was a little concerned by me. Anyway I did my spiel sold her some stuff and at the end she apologised and said she had judged me and shouldn’t have. She said she was 80 something and had been taught a very valuable lesson. We dated for a while but it really felt like old age was creeping up on me haha. All true apart from the dating thing I swear!

All my tattoos either have meaning or tell a story. This is just my personal approach. I can totally understand why someone would just get a cool tattoo because it looks good.

I love everything about tattoos.

I love the art

The process of choosing and/or designing

The actual pain too. I know that sounds a bit sadistic and I promise I don’t have any bodies buried under my house but I don’t know it’s kind of a rush. My pain threshold has always been pretty good. I’ve had a few stoushes (in a different life) haha and the only way to learn how to fight is to cop a hiding or two haha.

My Mum is worried I’ll be completely covered in Tatts one day and I’ve had to promise her I’ll never get a face tattoo which I wouldn’t anyway. I’m also not a big fan of the solid sleeves. I prefer to see be such piece and have it framed by the skin if that makes sense? 😉

Have you got tattoos? I’d love to hear about yours.

Add me on MySpace guys haha.

Remember “Tom” on MySpace? He was always your first friend. I wonder where Tom is now? Probably homeless and bankrupt and planning revenge inn FB and Twitter. Haha