First and foremost YES I am well aware that the shields (Hoplites) are upside down BUT as they are my warriors I prefer the shields the other way up, or is that just my way of making a mistake ok in my brain hahahahaha. ?

Second, there will be LOTS of pictures in this post.

Third, this will be my last post for the year. What with Christmas tomorrow and then the new year etc. It’s been a good and bad year for me. We had something really tragic happen at the start of the year which effects me to this day and will always be with me. However it made me re-evaluate life and take a chance and start my own business which, so far, has been going really well. I also reformed a band with my best mates which has been a lot of fun. We might be old but we still rock out with our wangs out… Ummm not literally of course, well sometimes maybe haha.

Fourth, I’ve drank half a bottle of Port thus far so excuse the mistakes in the text if it happens.

I saw the movie 300 when it was released with my three best mates and my Dad and we were all blown away!!

I’ve always been a fan of sword and sandal movies and stories, eg. Spartacus, Ben Hur, The Vikings, The Iron horse, Gladiator etc etc. Especially the ones based on true events or people.

A little while ago I joined Instagram which, at first, didn’t really grab me until I started seeing it as, yet another, source of inspiration. While trapsing throught the endless pictures, some good and some not so good, I found a conversion that blew my mind. Sorry, I can’t actually recall who it was that posted it. It was a Kairic Acolyte Made into a Spartan Warrior.

For those of you that don’t know what a Kairic Acolyte is, it’s one of these. 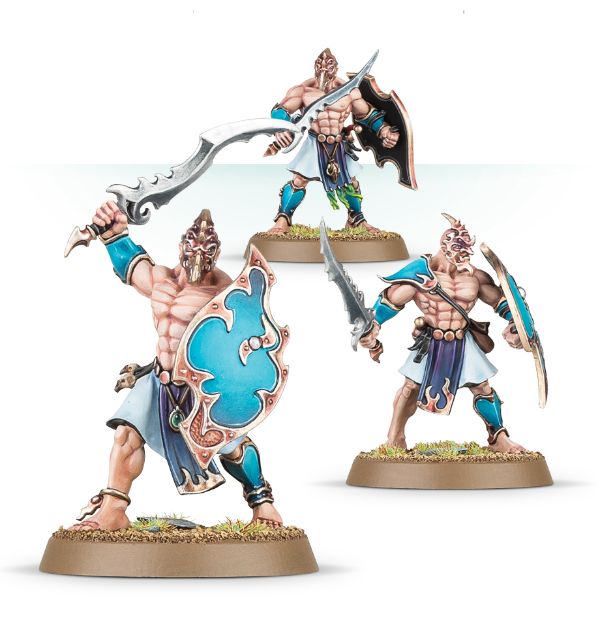 For me they are kind of boring and fluffy and magical. Blerrr. Their curvy, poncy swords are enough to make even the gentlest of elven folk puke.

The picture on Instagram used the Kairic bodies and the heads/helmets of marauders with the plumes from the Fyreslayers. One of these. 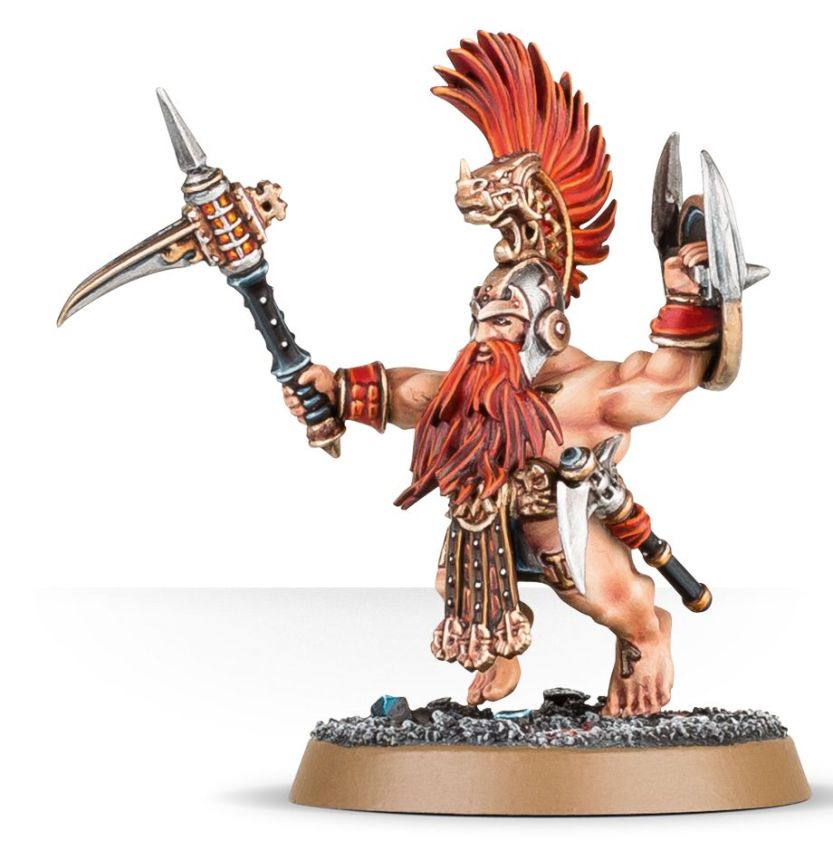 I was amazed and knew I had to make something similar. I’d love to of been the original on this but credit where credit is due I say… Even though I don’t know who the person was haha.

Anyway, I kinda, sorta cheated and bought some heads and shields from Scibor. The weapons are an assortment of bits and bobs from various sets. I did want to keep it all uniformed but then liked the idea of a little customisation. I also got some heads from Spellcrow (Helmet-less heads) just for some more variance. I was thinking about the last third of the movie 300 where the group is looking a little more rag tag.

2. General Miltiades sent a runner/messenger to Athens to inform the Athenians of the great win over the Persians. The poor runner ran, non-stop, 26 miles, cried                    NIKE (Which means Victory) and then died. That’s why, today, the Marathon at the Olympics is 26 miles long.

3. You can’t roller skate in a Buffalo Herd.

I absolutely, thoroughly enjoyed this little mini project. I started it on Friday and finished it today. Not bad. It’s not perfect but I’m really happy with the finished result.

So here are my 15 warriros. Each man is as good as and worth twenty men hehe.

His arm is actually in three pieces from three different arms. Four if you include the sword. He’s the only left handed bloke in the team. He’s also the only one with a gold bladed sword. He’s missing his dagger too but still has the sheath… which… can… be… lethal… in the wrong hands.

The arm joins are a bit rough but passable.

2. Captain Antolios – Second in Command. Note the arrow in his chest that seems to be no bother at all. THIS IS SPARTA!!!

The sword arm is from a Bretonnian Knight. Works well for a Champion I reckon. 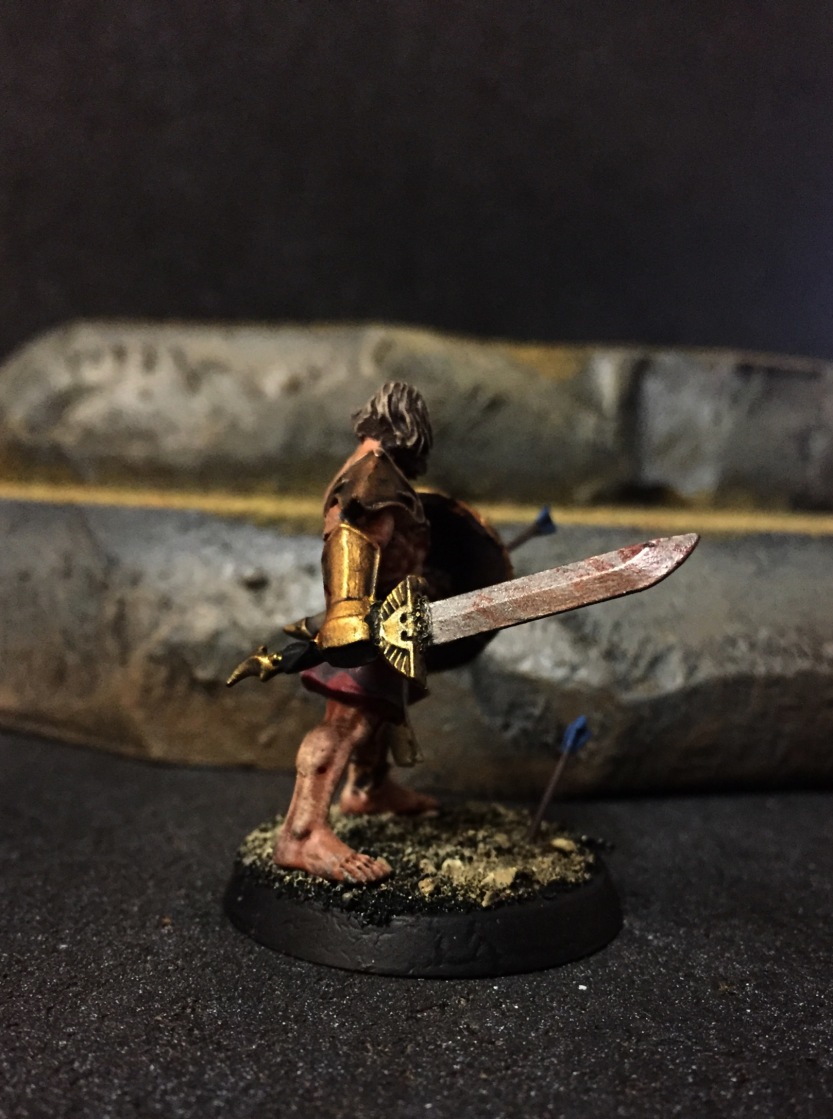 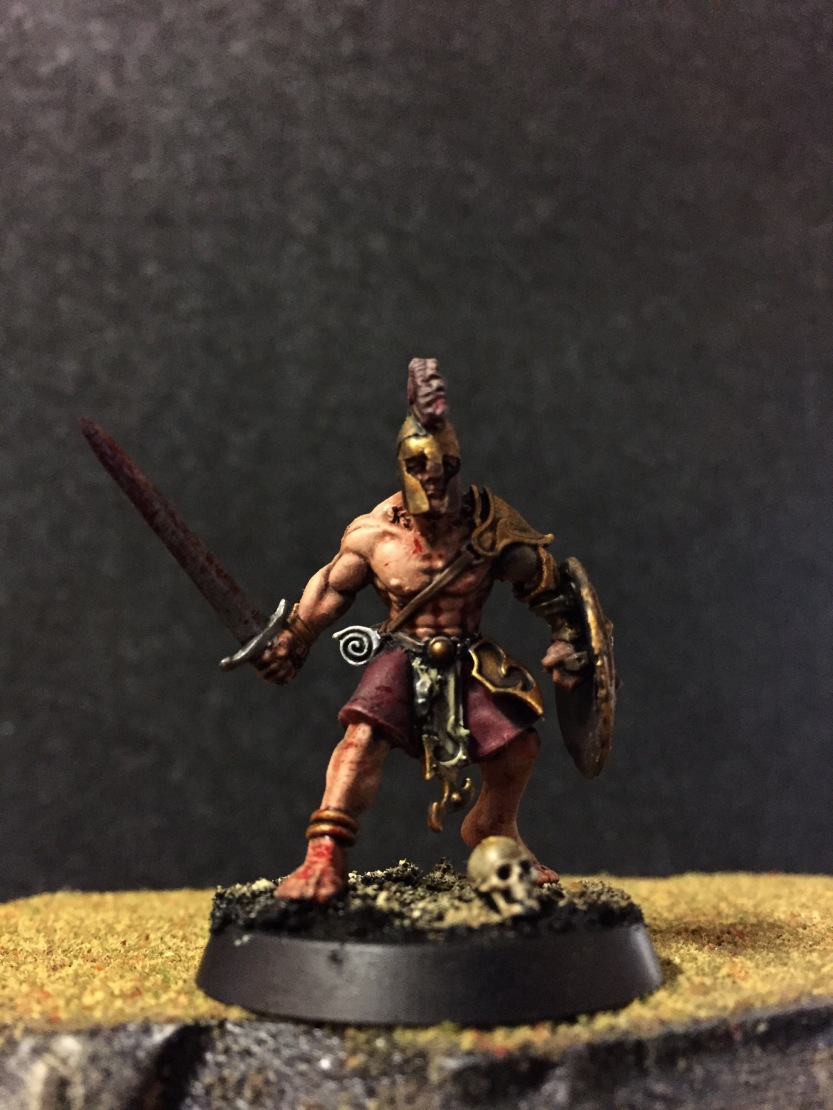 I didn’t go too crazy with blood spatters. I’m really trying to go with the theory of “Less is More” which is difficult for someone like me who is a big fan of blood and gore haha.

His sword hand went a bit craggly for some reason.

As well know, if you’ve seen the movie 300 or done your homework, a Spartans prefered weapon is his spear or “Dory.” No jokes about finding it please hahaha, well go on then. Therefore I had to have some of the warriors wielding Dory’s. Apart from this bloke all the others are holing their Dory further down the length to suggest they thrust it as opposed to throw it. 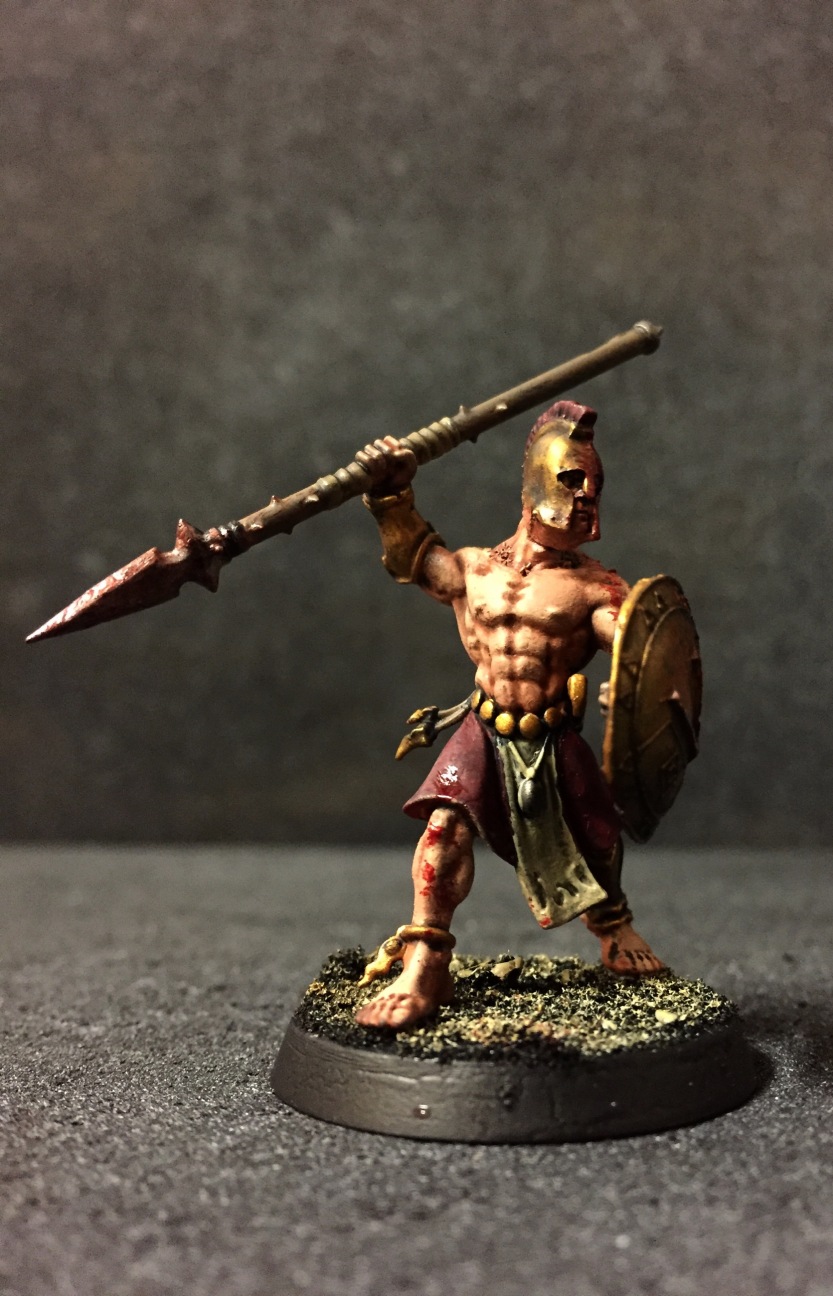 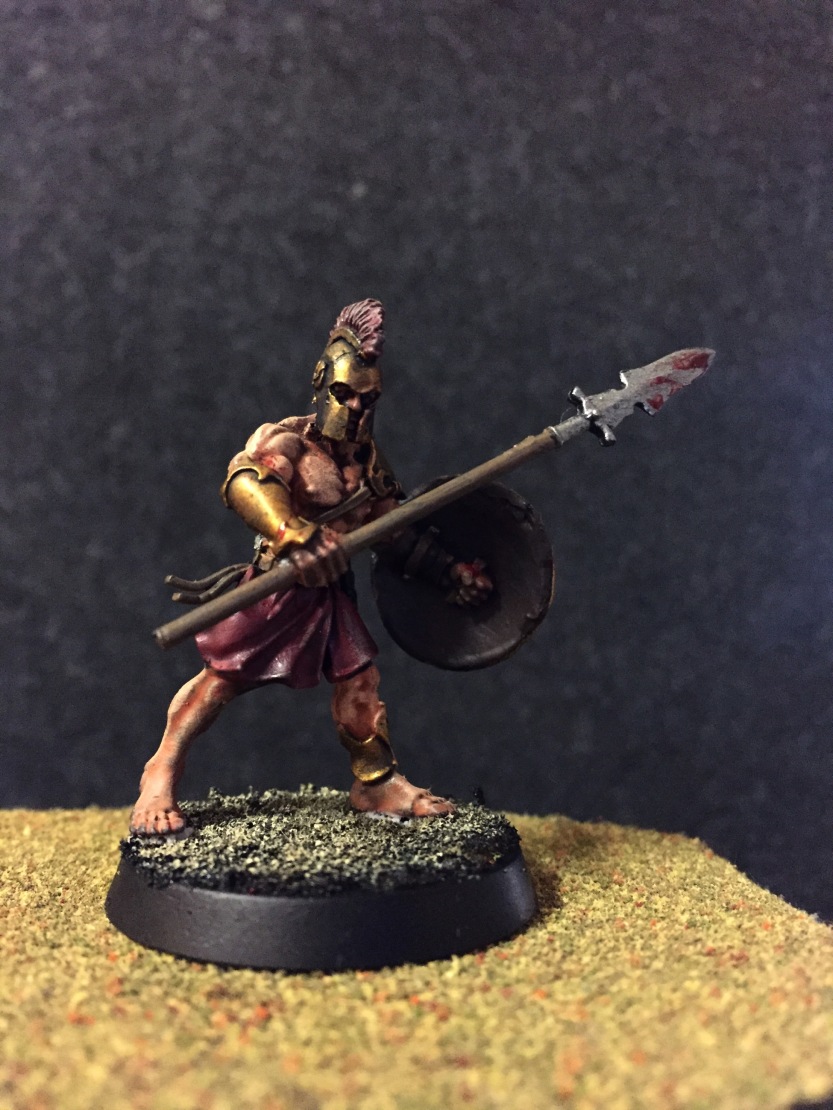 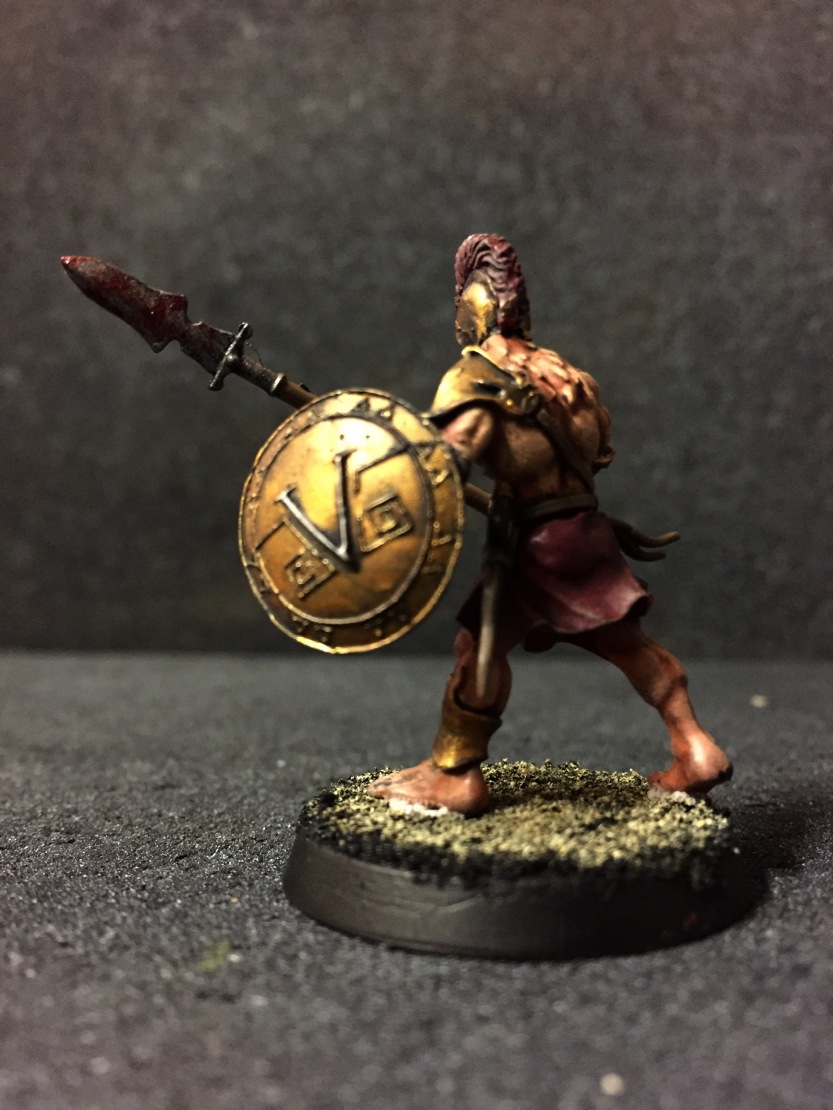 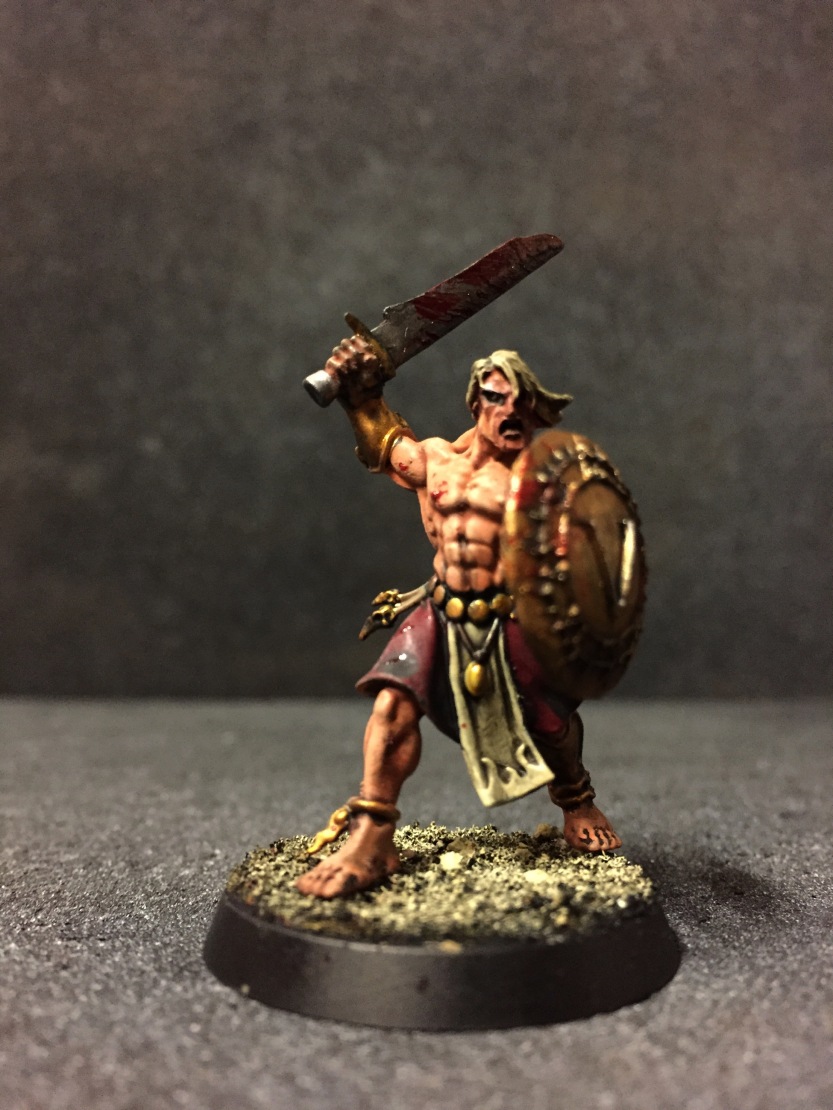 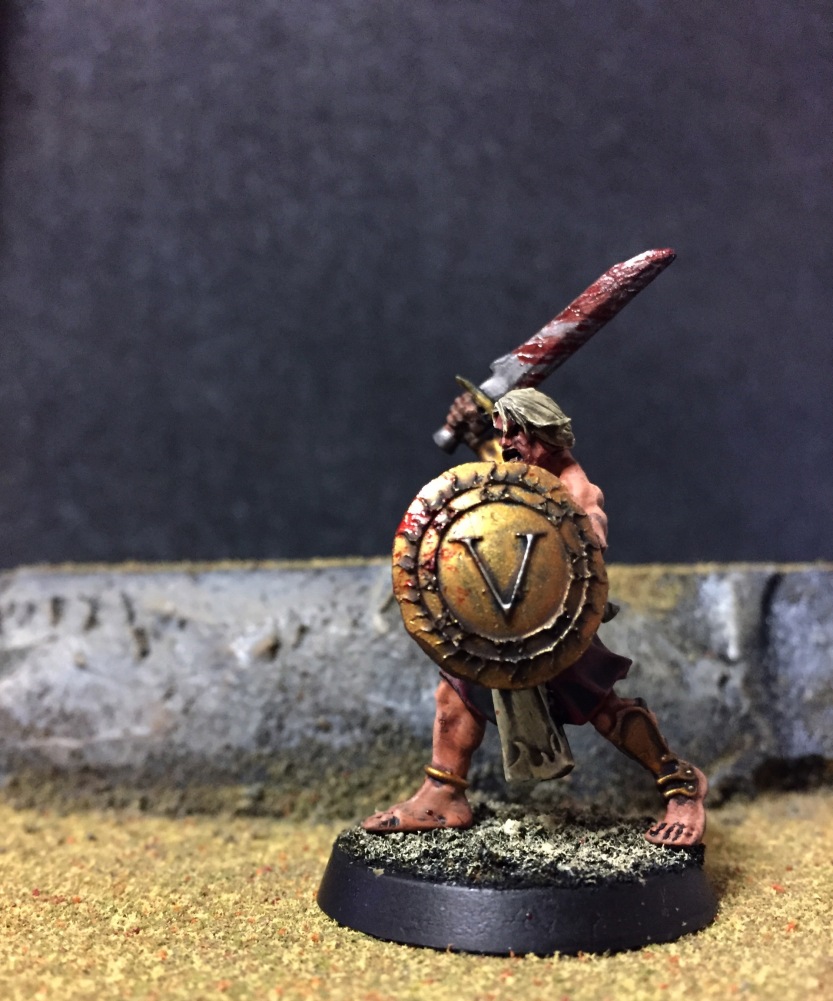 10. Solon. Despite the fact that the Dory is the prefered weapon, most of my dudes have swords. They just look cooler haha.

The blood spatter is just right on the shield.

Really happy with the pose and he’s another favourite.

I like the damage on his shield. He has an air of arrogance about him too. Must be the size of his nipples I’d say. 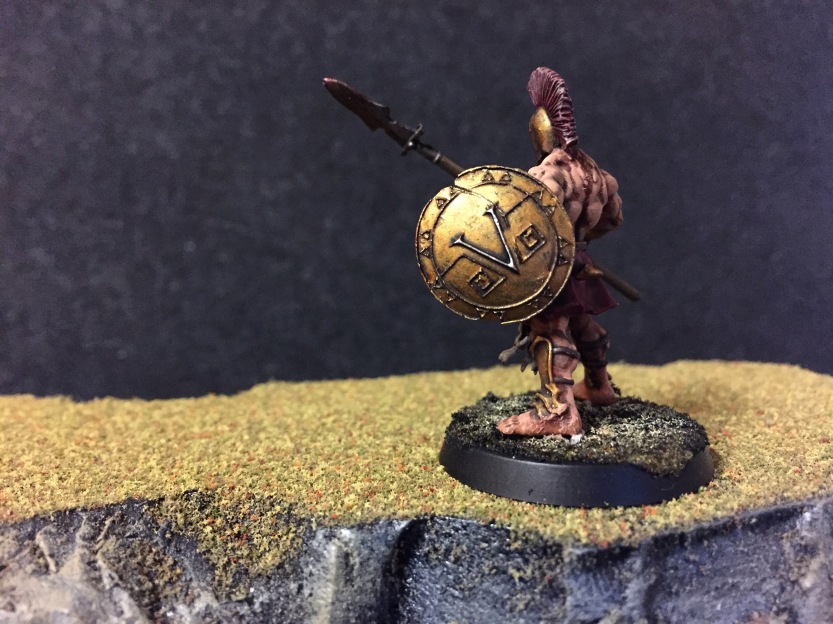 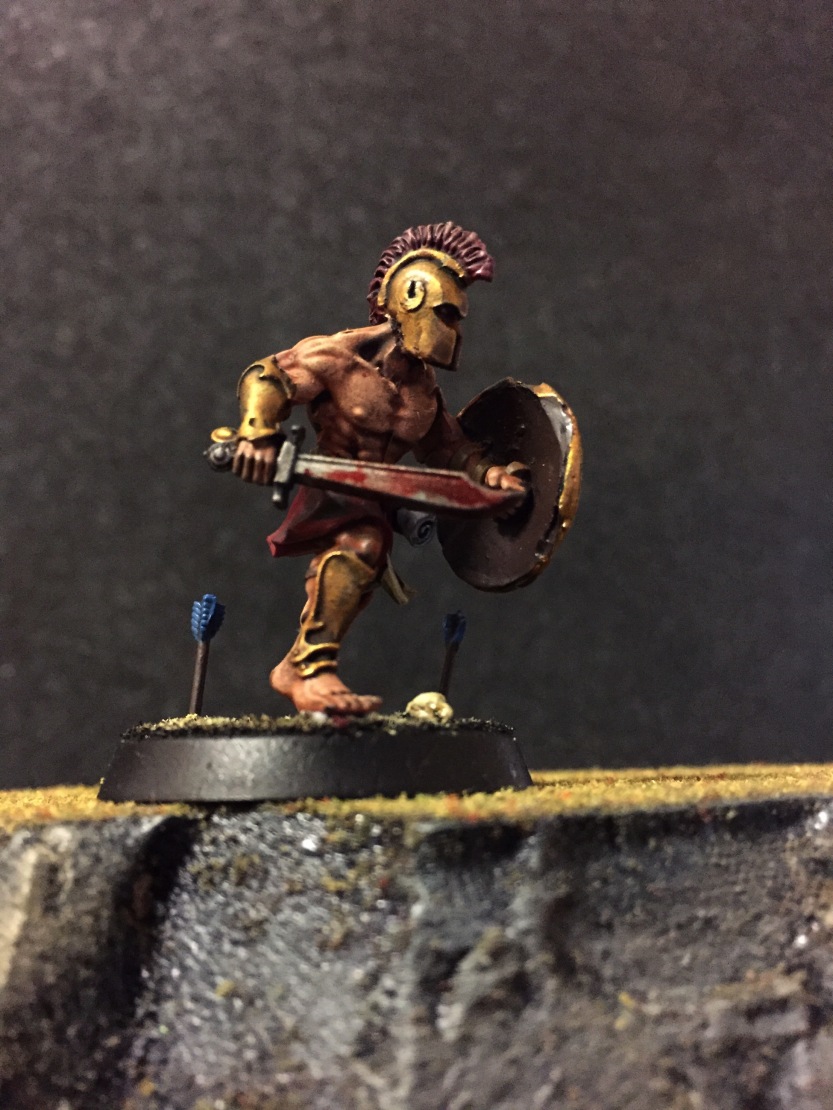 More of a thrusting motion pose.

14. Demetrius. ANOTHER FAVE haha. Note the scar across the helmet. 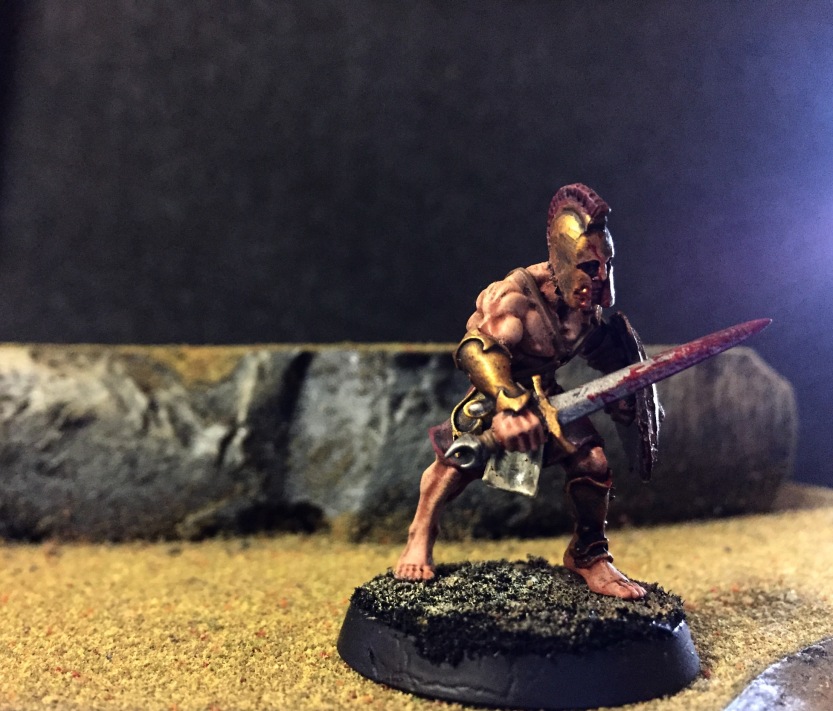 I love these models and I can feel in my heart that i may make more. We’ll have to see in 2018.

I’m not going to do a “Look back” through 2017 post. All I’ll say is that I’ve really enjoyed my hobby and blogging this year. It’s been a bit of a saviour for me.

I can’t thank you all enough for following, commenting, liking, advising and generally conersing with me. I really have grown to love this little place on the web. I look forward to reading your posts just as much as I enjoy seeing what you all think of mine.

Have a safe and happy christmas and a bloody fantastic 2018.

I’ll leave you with some group shots and action shots of the “15” in action against some Skellies and a few Nurgle creepies. 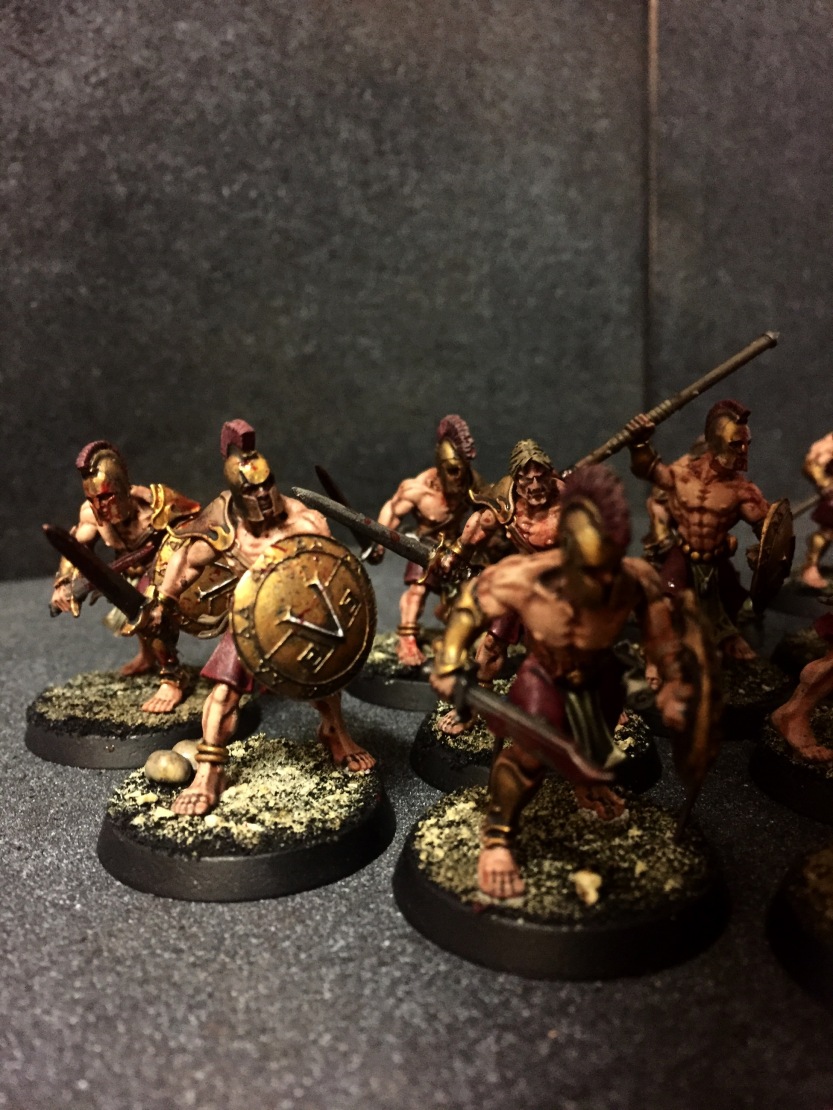 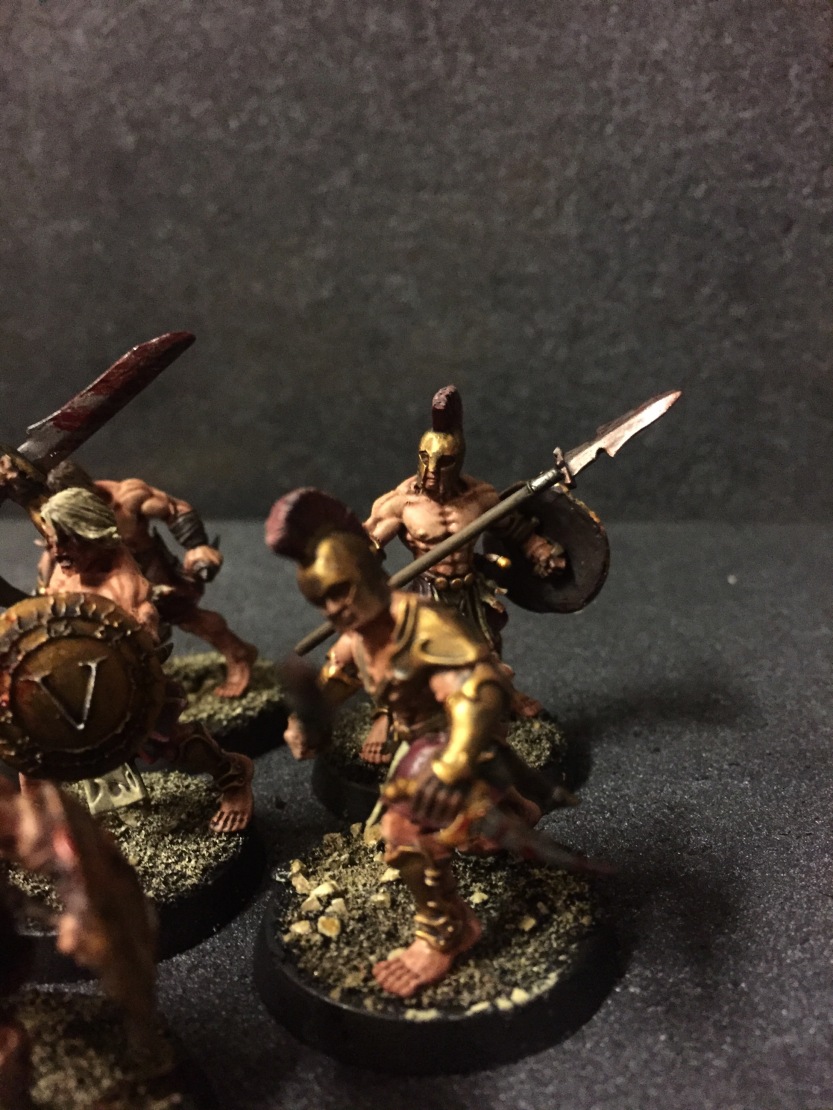 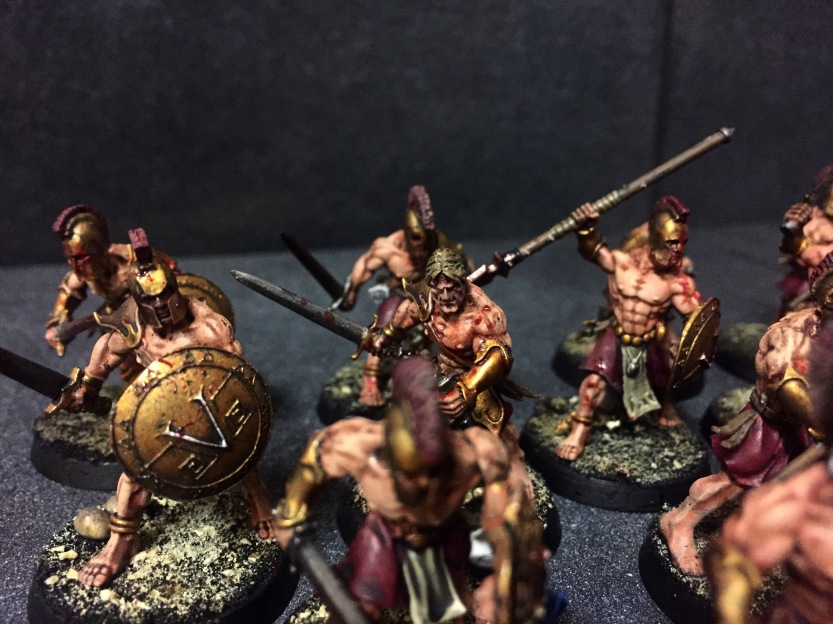 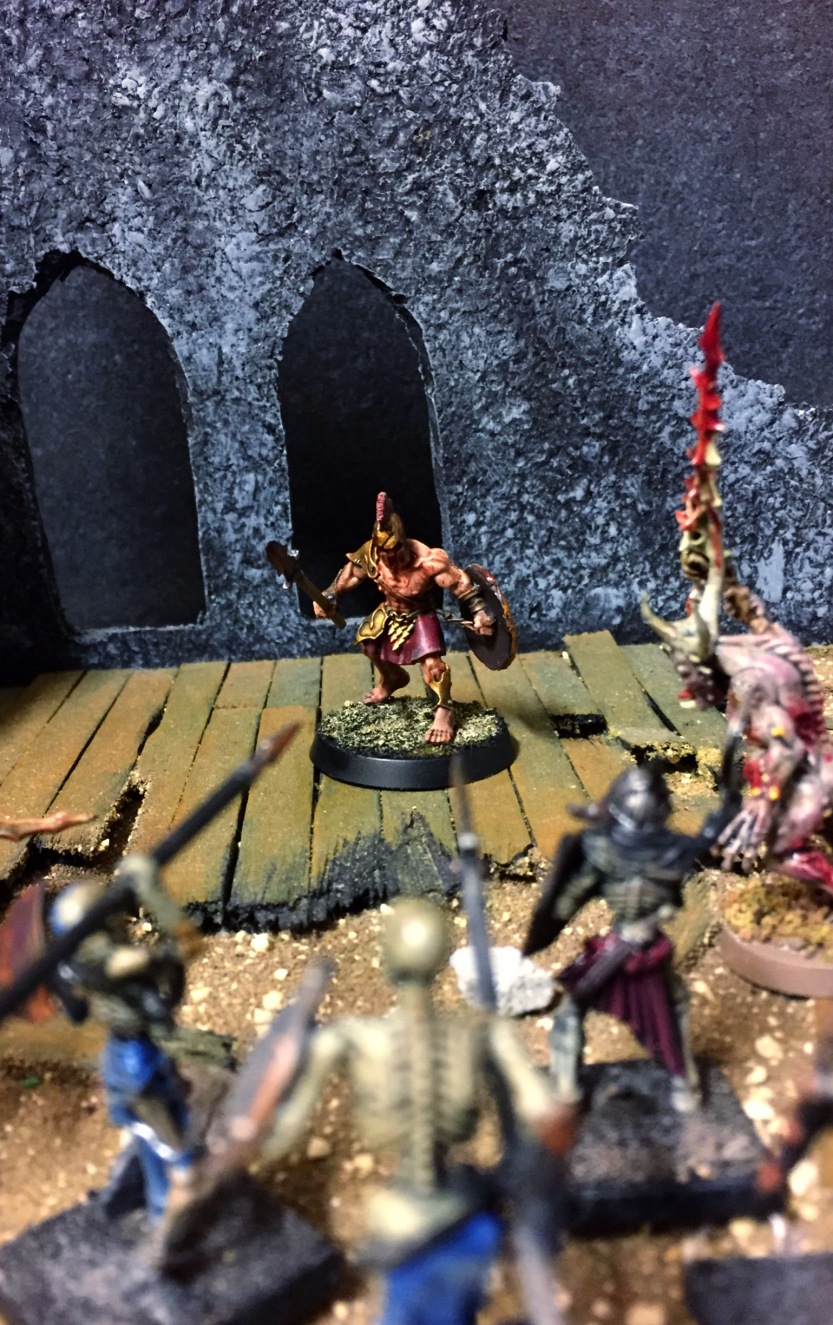 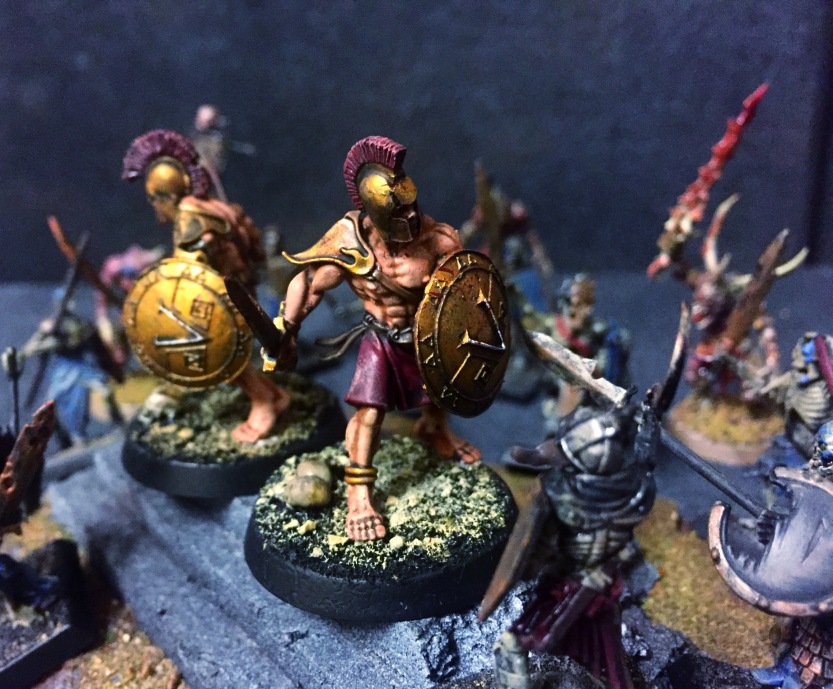 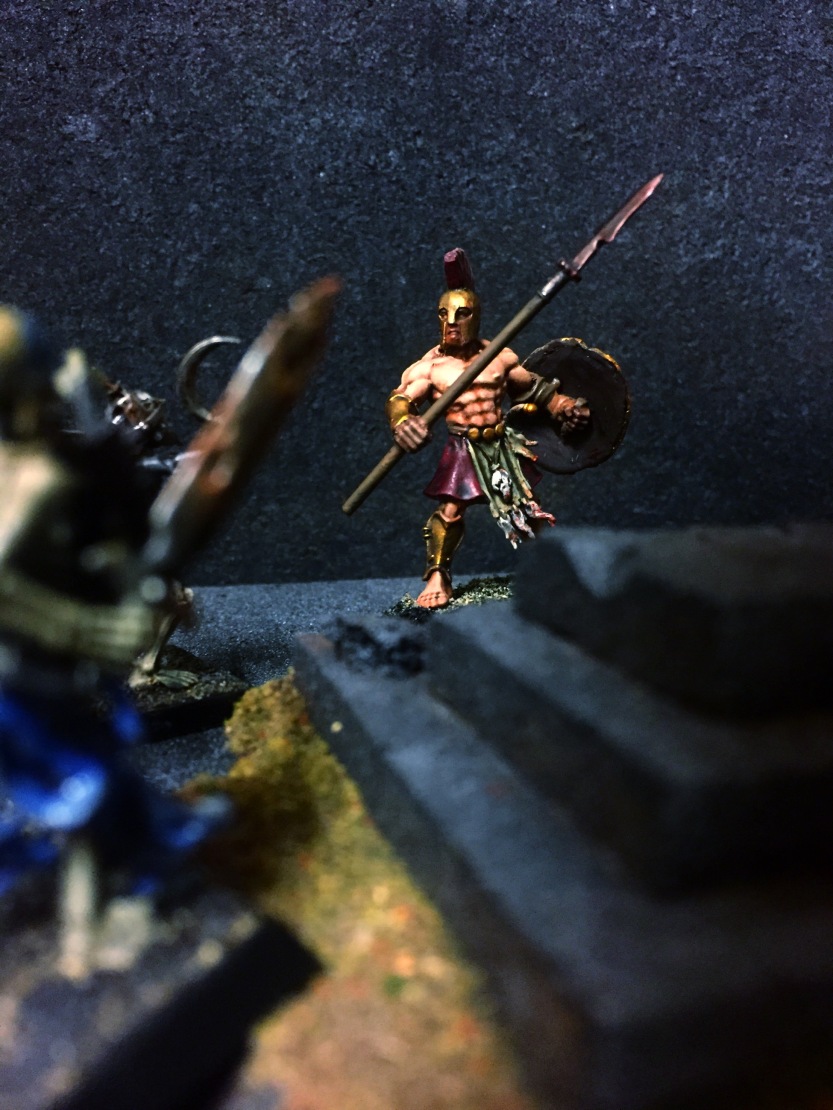 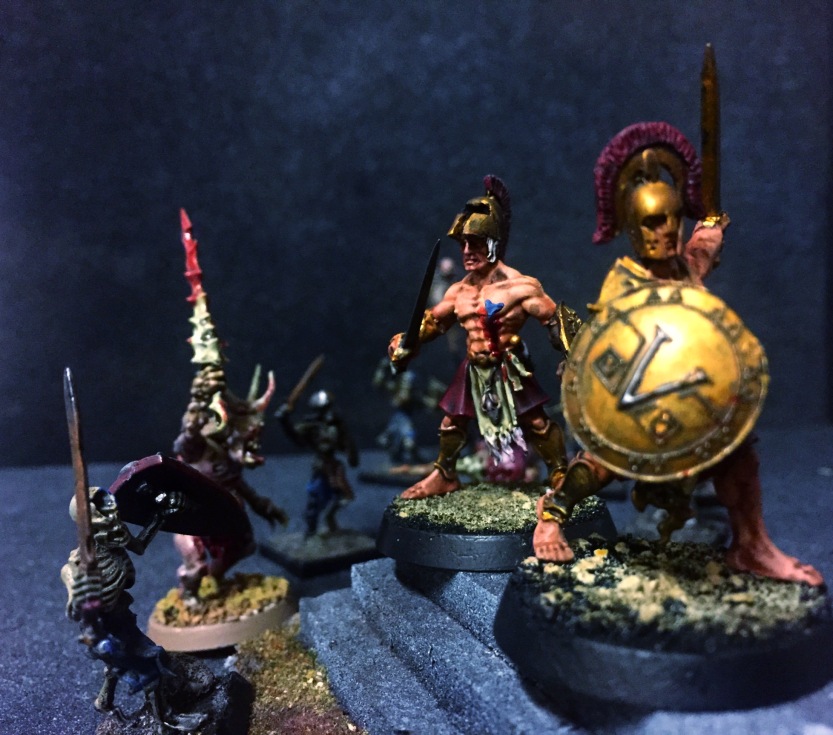 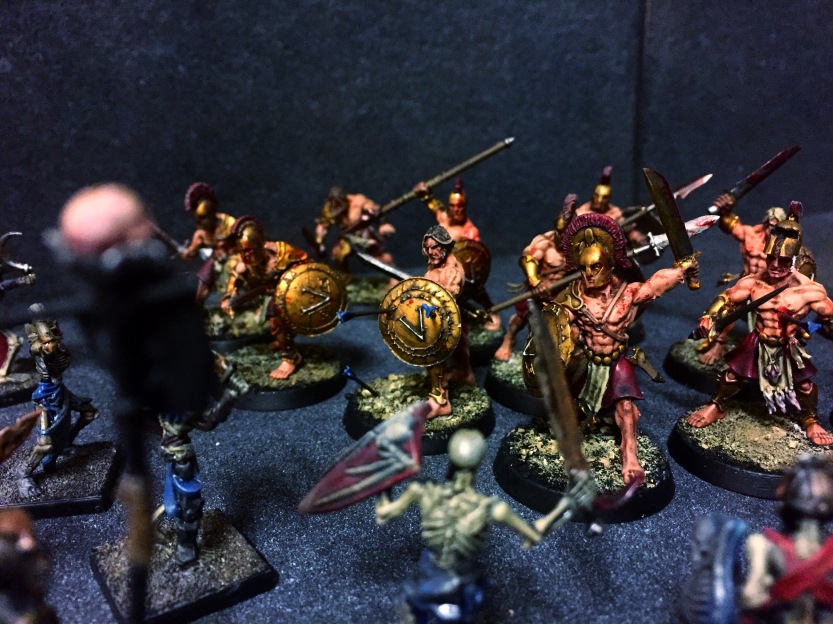 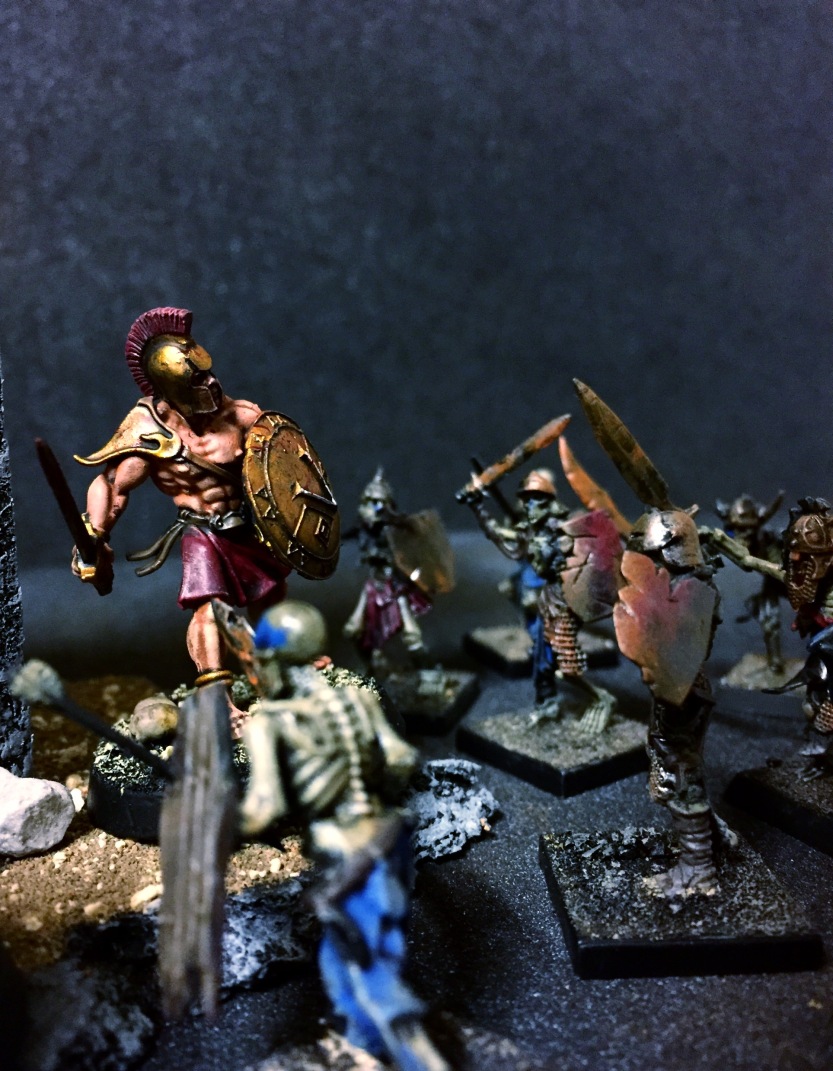