Yes I like blood, gore, the macabre and the twisted but I also like little fluffy bunnies.

As Easter is upon us and because the response to my last post I thought I’d write about my softer side haha. Sort of.

The fantasy story by Richard Adams was first a book (1972) and then, in 1978, it was adapted into an animated movie.

It tells the story of a group of talking and characterful rabbits who set out on an adventure to, literally, find greener pastures. Sounds really bloody stupid right? Well friends let me assure you it is far from it. In fact it is the best animated movie, in my opinion, of all time.

If you’re unfamiliar with the movie the first thing I want you to do is stretch out your hand and then SLAP yourself in the face as hard as you can. Next, watch the trailer.

I can’ remember exactly what age I was when I first watched the movie but I lived in England at the time so, at a guess, I’d say about five or six.

I get the same buzz out of watching it now as I did when I was a kid. Just like I do with the original three Star Wars movies. Unfortunately two of my three girls are not into it and roll their eyes when I suggest we watch it on a lazy Sunday arvo. The youngest has only watched it a few times but has enjoyed it so theres hope there.

For me, it has everything a kid and man-child could want. Drama, action, violence and even some nightmarish, psychologically tormenting thrills . It can be very cute at times but also extremely violent but, as a kid, it wasn’t the violence that freaked me out it was things like “Fiver’s Vision”. Remember that? 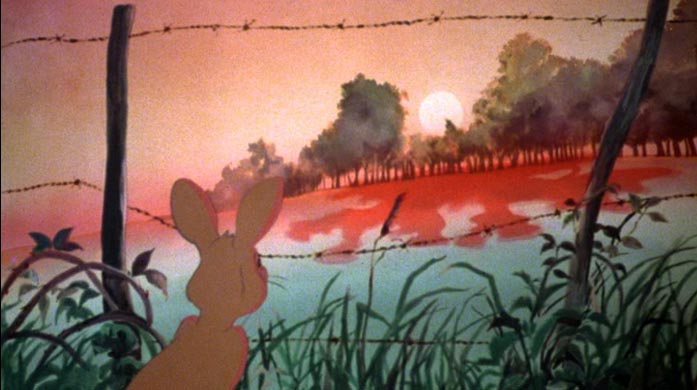 Just one of many creepy moments in the film.

I like the “Great Escape” feel to the movie and this was, partly, the writers intention as many of the main characters were modelled after real WWII Officers.

Out of all the characters in the movie BIGWIG (Voiced by Michael Graham Cox U.K TV Star who also had a role in A Bridge Too Far) was, undoubtedly, my favourite! He was tough as nails and brave but had a gentle side too.

Still now when BIGWIG is caught in a rabbit snare I get a lump in my throat. Ssshhh, don’t tell anyone.

This is BIGWIG during a fight with “The General”

Speaking of the General, WOW! What a Super Villain. He’s up there with Darth Vader Hannibal Lecter and this guy…

Well maybe not that guy. 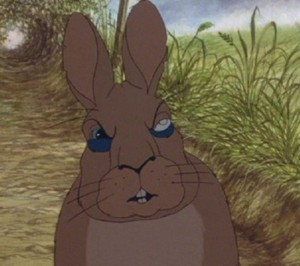 I don’t want to give too much way in case you haven’t seen it but all I’ll say is you’ll be pleasantly surprised with just how engaging this movie really is.

Fiver stars from me for this gem of a movie.

26 thoughts on “and now for something completely different”