Well, they received some new recruits and elite ones at that.

– The Bloodpact Army lay strewn and in pieces across the burning lands of Denizon Mir. Basilisks on both sides had torn apart the skies with their thunderous booms leaving hundreds dead with each earth and bone shattering volley. The Vostroyans had fought hard and, just as their reputation had declared, they fought to the very last man. Leaving only a handful of Khornes Bloodpact Renegades standing. General Manx looked at his weary brothers, took a deep breath and then said, “We will March through the death, decay and blood until we find our own deaths my brothers. We are victors here this day no matter the losses sustained. We reigned supreme because the blood of khorne runs deep through our veins and strengthens our souls. We will march to a new battlefield and a new war and we will march with a new name. We are the Blood Strike Renegades! For now though, my brothers, we will hold here to regain our strength. Sergeant Garsh, post sentries and keep a keen eye.” – 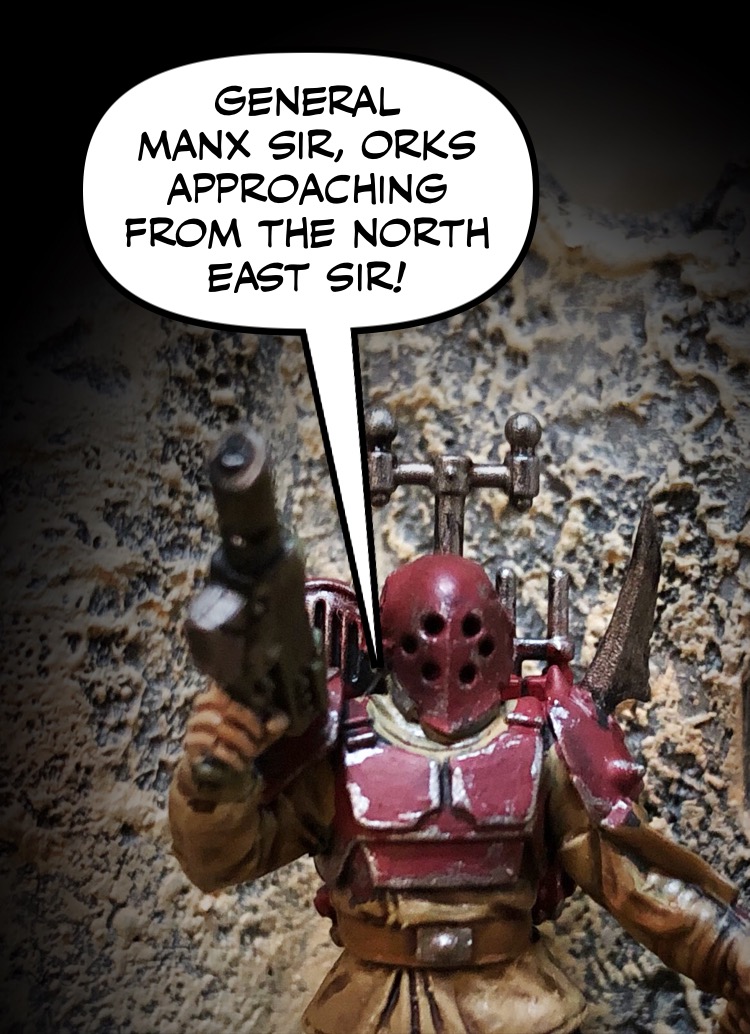 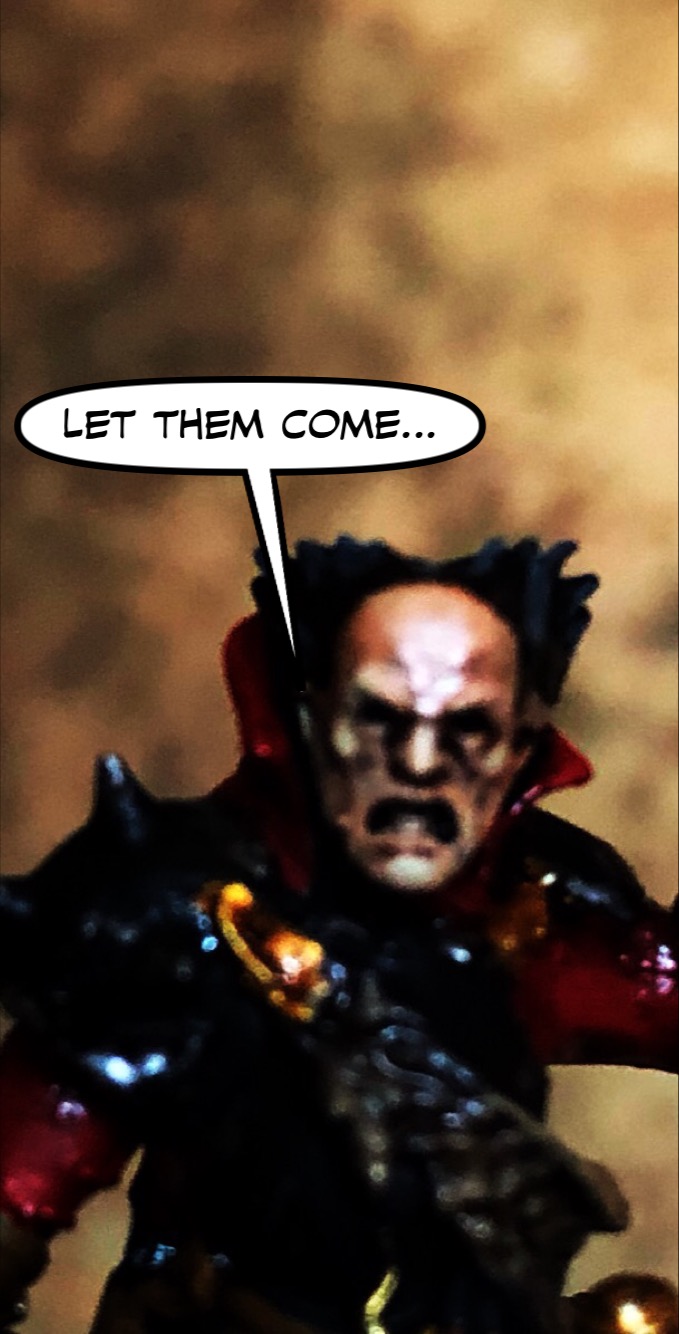 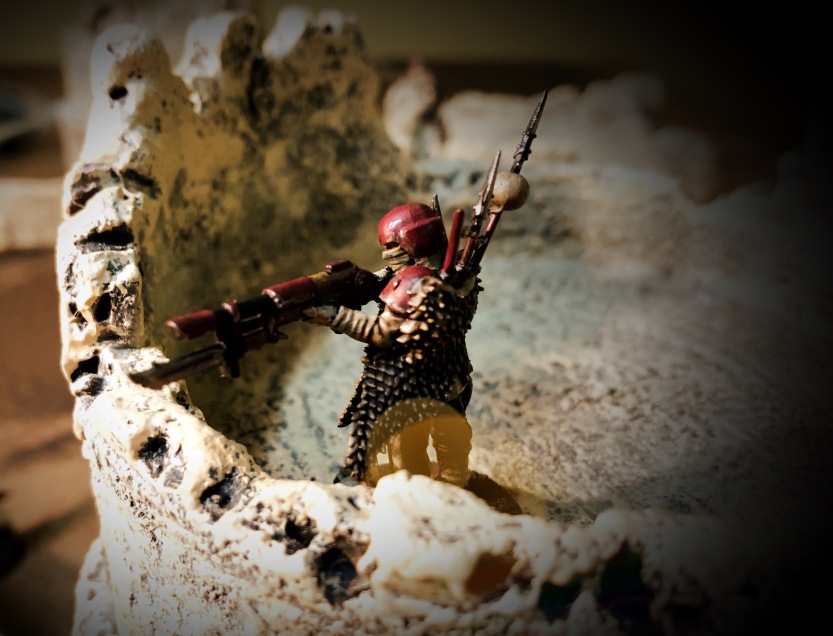 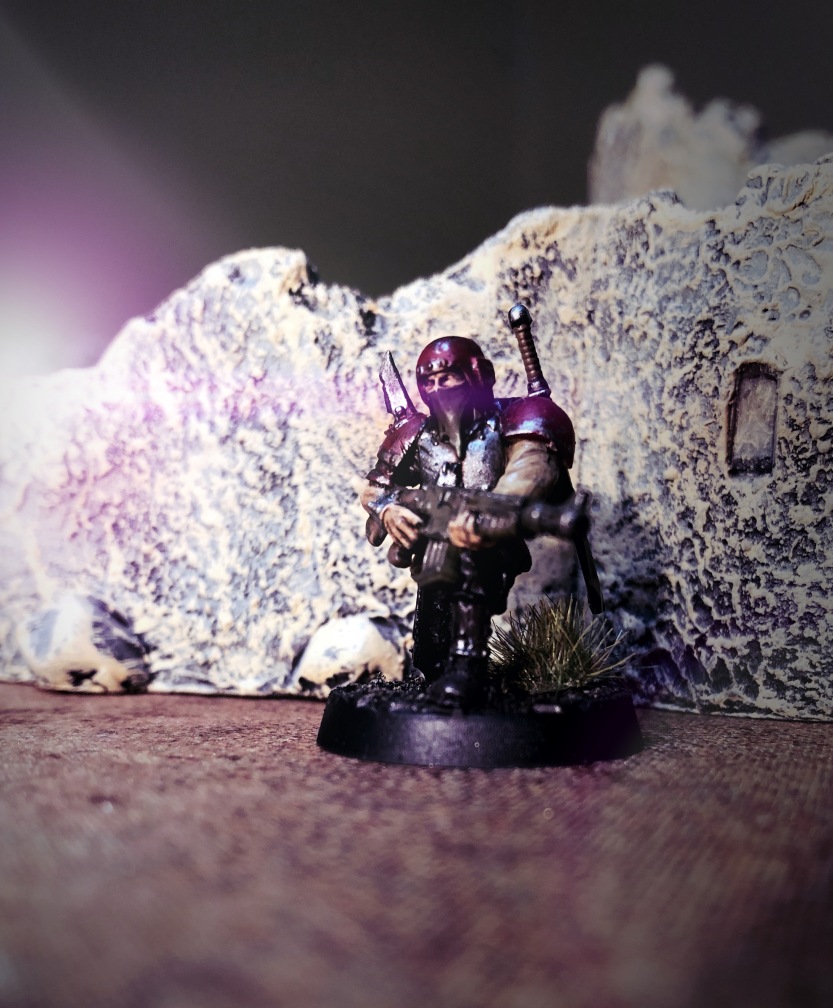 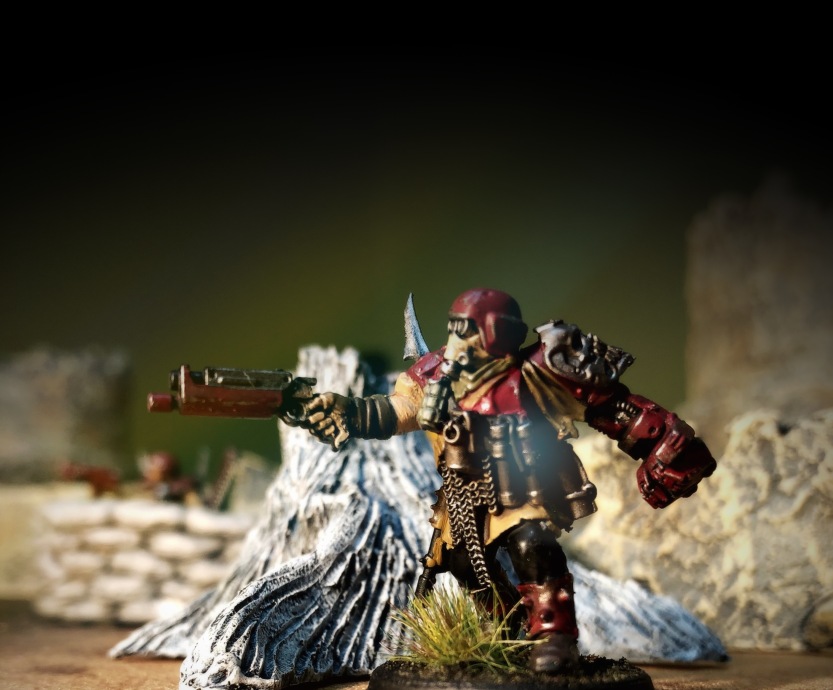 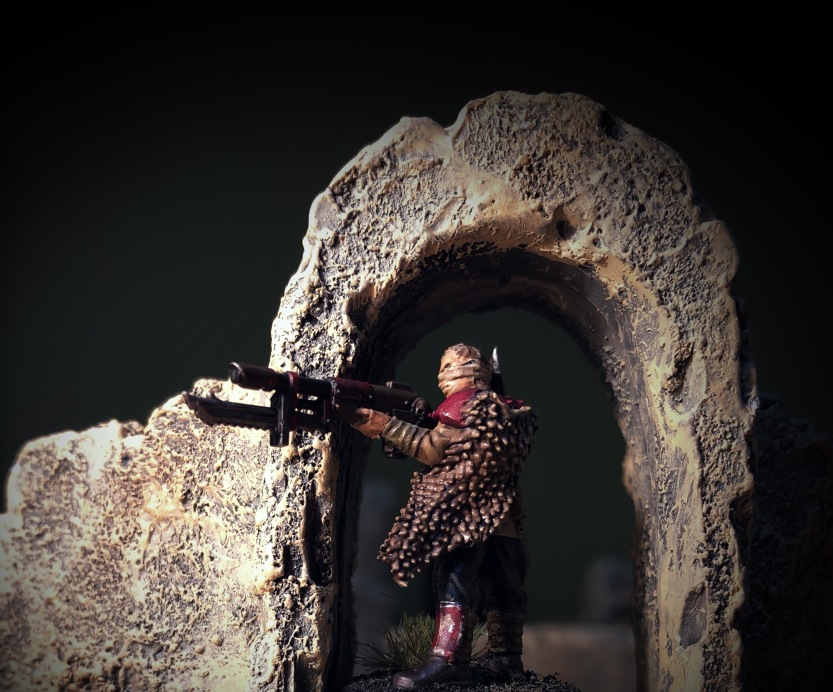 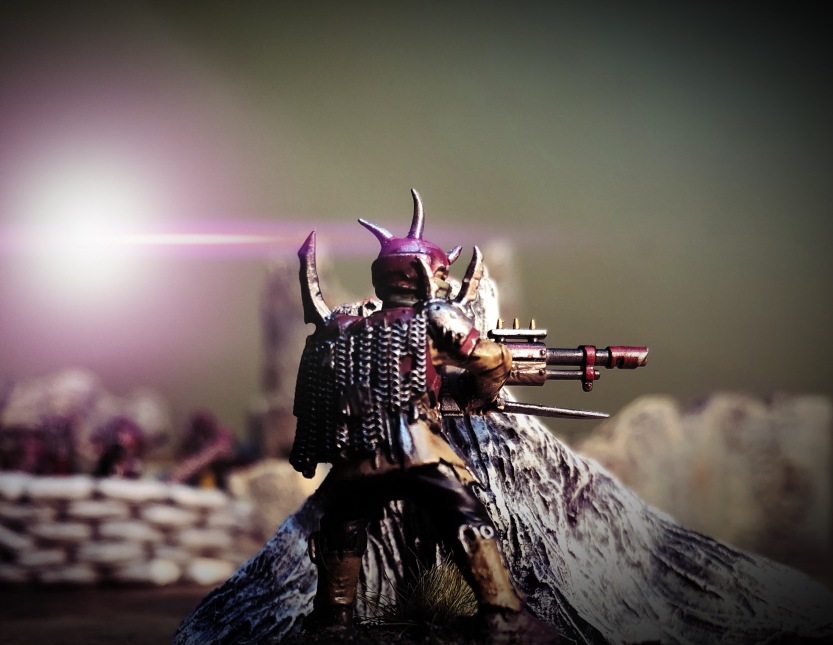 The base minis come from the new Blackstone Fortress game from GW. They’re amazing sculpts that are full of converting opportunities but you can’t be any geek off the street you’ve got to be handy with the steel if you know what I mean 😉

Apart from General Manx who was a challenge to say the least to carve up and make fit together THE WAY I WANTED HIM TO I kept the conversions fairly simple.  Head and arm swaps here and there and a few other tweaks. It goes without saying that the more I like a miniature the way it is the more I don’t change it UNLESS I am in a particularly creative mood.

On instagram and around the web I’ve, mostly, seen these chaps painted like Cadians with a splash of red. I liked the red and because they’re BLOOD Renegades I thought red would suit the theme. I still gave them a hint of Cadian though. I really enjoyed painting them and was determined to finish the whole 16 minis with Tank. (Below).

General Manx is my favourite in this group. It’s a great head and the body screamed “officer” to me. As mentioned before he was a challenge though. The legs I wanted to use had to be carved so much that I ended up taking too much off his left thigh so he gained a chainsword hanging from his belt to cover up the mistake. I’m the cleverest halfwit alive! 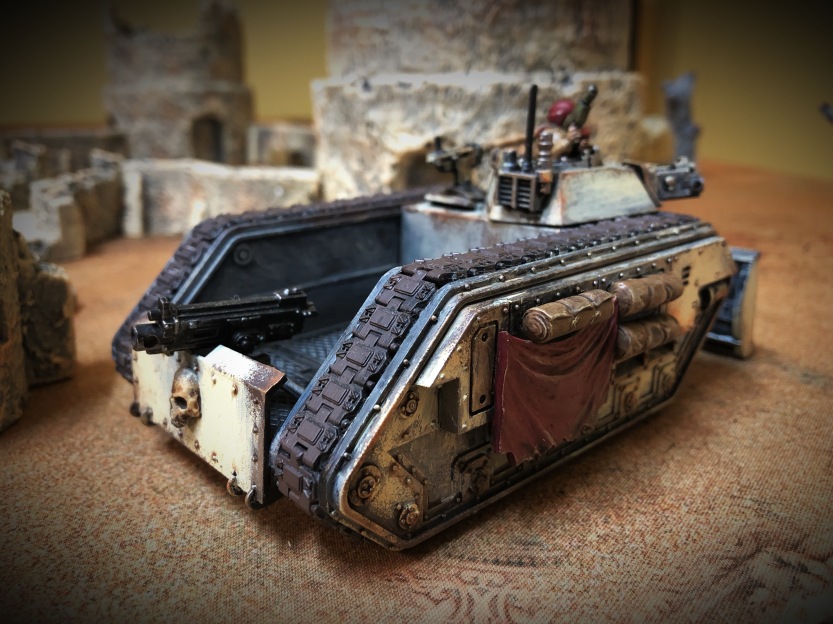 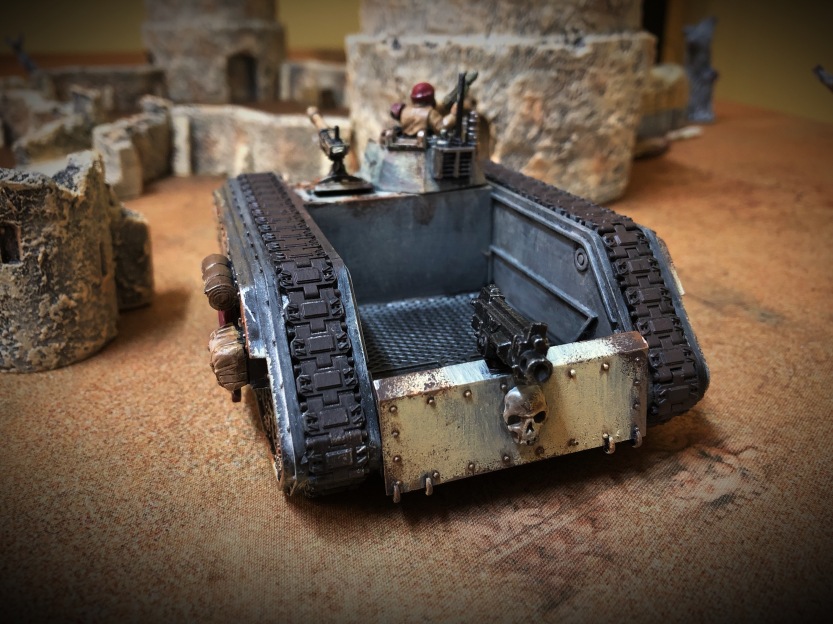 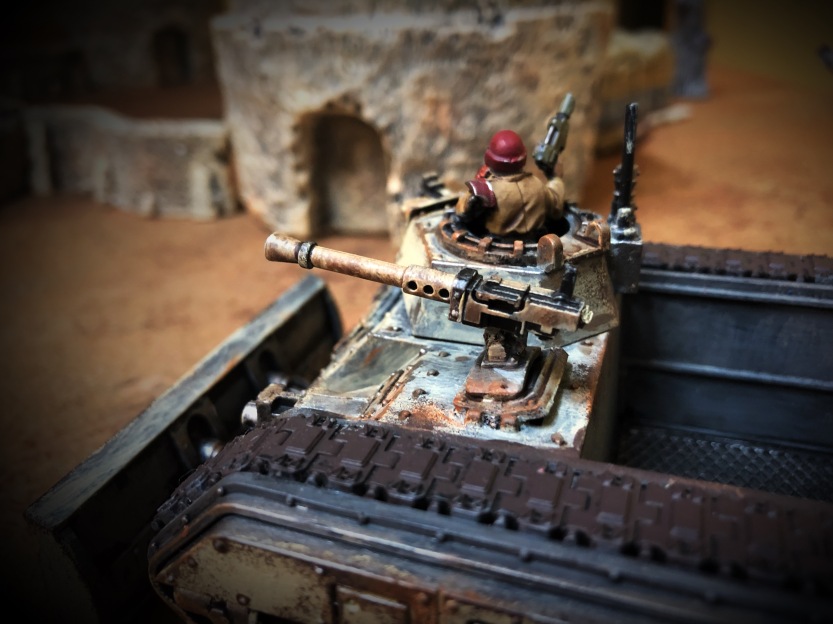 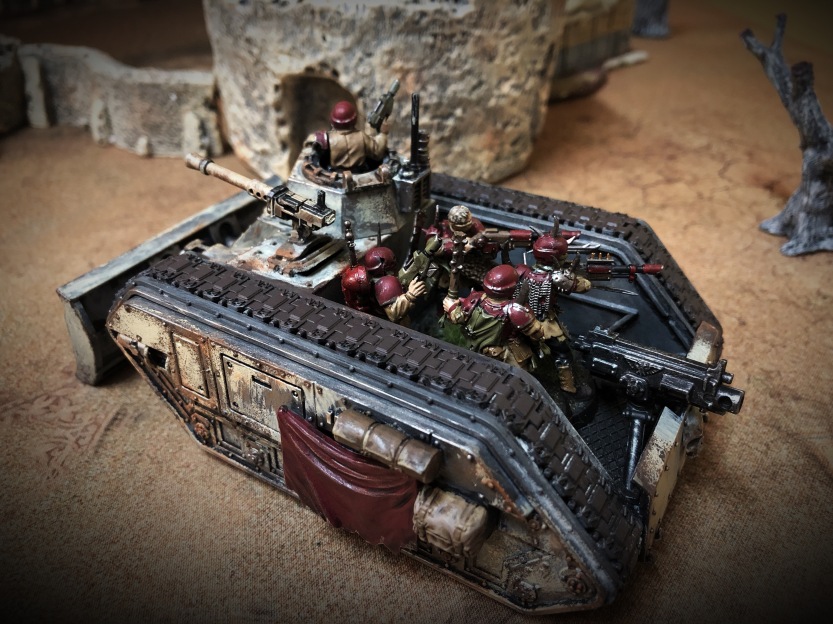 The tank I’d converted ages ago and had originally intended it to be used for the 701st Royal BannaRoff Guard but found it suited the aesthetic of these heretics more so. I really like the open top and the banners hanging from the sides. I do plan on painting some emblems on the banners eventually too. Painting the tank was a load of fun. I really, really, really, really enjoy weathering. I think I like it because it’s fairly free form. No specific rules which is my favourite way to paint. The overal colour scheme and the general mad max, post apocalyptic, arnarchic feel to this little armoured unit of war dogs really flicks the switch for me. I’m tempted to do a full army of them with artillery and Valkyrie flyer too… sigh… me and my big ideas haha.

I will be adding some Traitor Krieg, as in Death Korps Of Krieg, to this army down the track too.

I hope you like the 113th Blood Strike Renegades dear readers and I’m hoping this is a good start to my hobbying year.

Oh yes and remember, Daddy Long legs have penises which, technically, means they’re NOT spiders. They are also one of the most venomous creatures in the world but their fangs (as well as their penises) are too small to penetrate human skin.