Much like Mr Wudugast and his Skaven Rats and his horde of Orks I think the Praetorian Guard is one project/army I will just keep adding to over time. If you’re new to my page then just type “Stouthearted” into the search thingy and you’ll find all the posts for my Praetorian Guard.

I really like the idea of collecting the old school models from yesteryear but I’ll also add any minis that I feel suit the overall aesthetic.

I have to say that Marvin’s page and in particular his “Personalities” series of painted minis definitely inspired me to get this latest addition painted up.

The Stouthearted 31st Praetorian Guard is quite a character driven army and today’s post is all about a gentleman who doesn’t tote a lasgun or any weapon at all really apart from his mind.

You see, Elmer Bligh comes straight from the Logis Strategos an imperial intelligence and analysis department of the administratum.

Born and raised on Finem Mortem he knew from an early age he was different. He was weak of body but strong of mind. While the other kids rough housed and got into mischief Elmer had his nose buried in old scrolls and parchments. He was no psyker but his brain was well advanced for his young age. He knew the workings of a Galv-Purifier Engine before the age of ten. He could surpass, even, his aging tutors when it came to equations, philosophy and literature by the time he was fourteen. Elmer was an avid reader and seemed to retain everything.

At sixteen Elmer Bligh was handpicked by Lord Militant Russman from the academy to join the Logis strategos and three years later he helped in the strategies to overcome the Ork invasion of Mashium VI. A triumph for the imperium that would never be forgotten.

Now, many, many years later he found himself attached to The Stouthearted. For better or worse he would do his duty and if it hadn’t been for his adultery he’d still be living the high life and enjoying a comfortable and well paying office job.

Despite the punishment, Elmer had grown fond of the men of the 31st. After all he could have easily have been one of them if it wasn’t for his high IQ.

Elmer Bligh’s job was to assist with all things tactical but also to gain and retain intelligence on the Emperor forsaken planet called Denizen Mirr.

Elmer Bligh. An officer, a gentleman and a bit of a deviate. 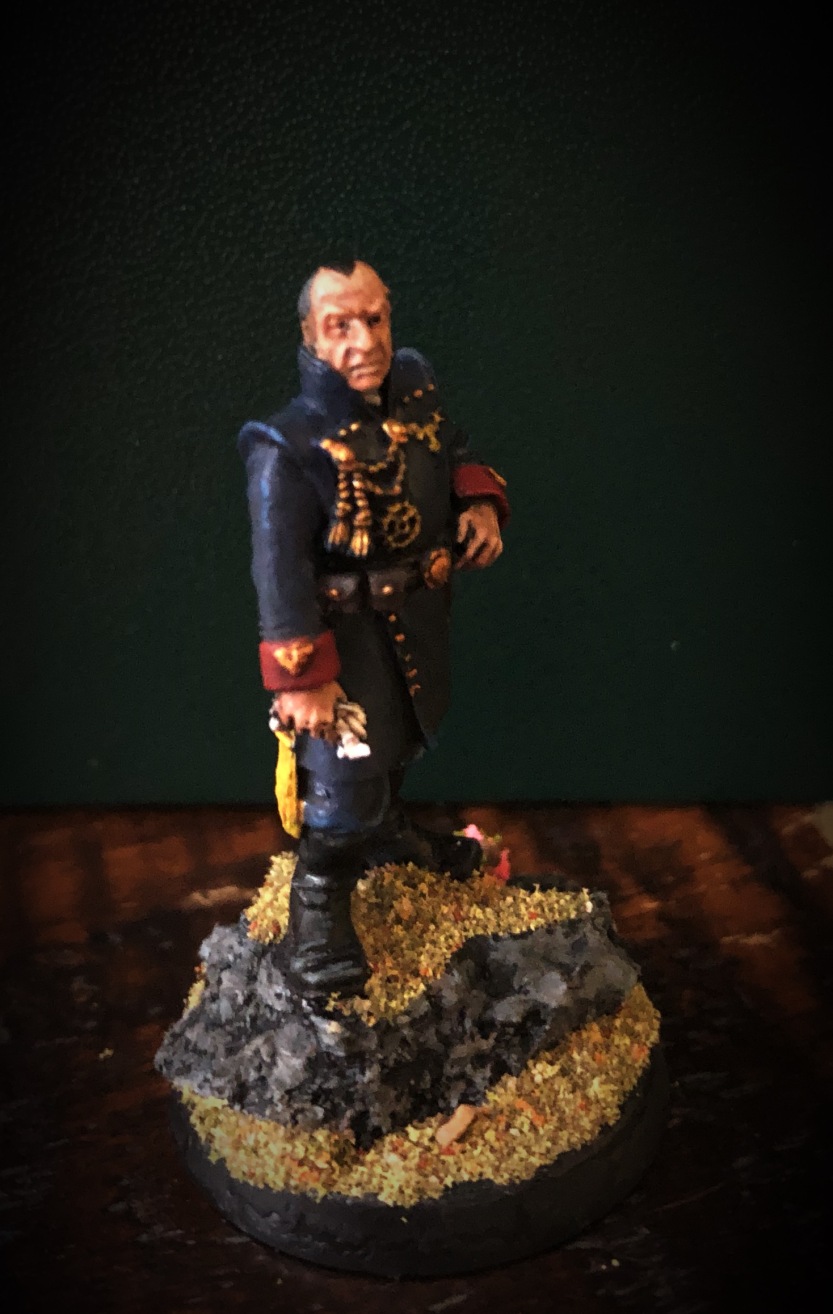 Sorry about the blurring in the last picture. I was trying to show you guys the skin tone and the eyes.

On another note episode 3 of The Fly On The Wall Podcast is now available and this one is allllllllll about Star Wars. So if you’re not a Star Wars fan you can be forgiven for not having a listen.

Here’s the link for the Apple Version of it but you can also find us on Spotify, Podbean and Anchor.

Thanks for stopping by and remember Gimps have feelings too.