I bloody love the Napoleonic War. Mostly for its uniforms and tactics. I don’t usually mention my fascination with that particular war on here because, well, most of my work is 40k-ish.

However, the blending of the two (Napoleonic War and 40k) is something I really love to do. It’s nothing new but, I like to think, I give my own certain something.

I’ve only combined the two themes once before with my Royal BannaRoff Project (ongoing).

Last year I built some 95th rifles inspired 40k troops which I intended to paint just like the 95th (dark green) but theeeeeen I got thinking about my lovely Red Coated Praetorian Guards and I thought, bugger it, paint them with red coats instead.

This first chap is one of the older vets. You can tell by his white moustache of course. One of my favourite steps to painting is highlighting and what better thing to practice on than a cape. (3rd pic). 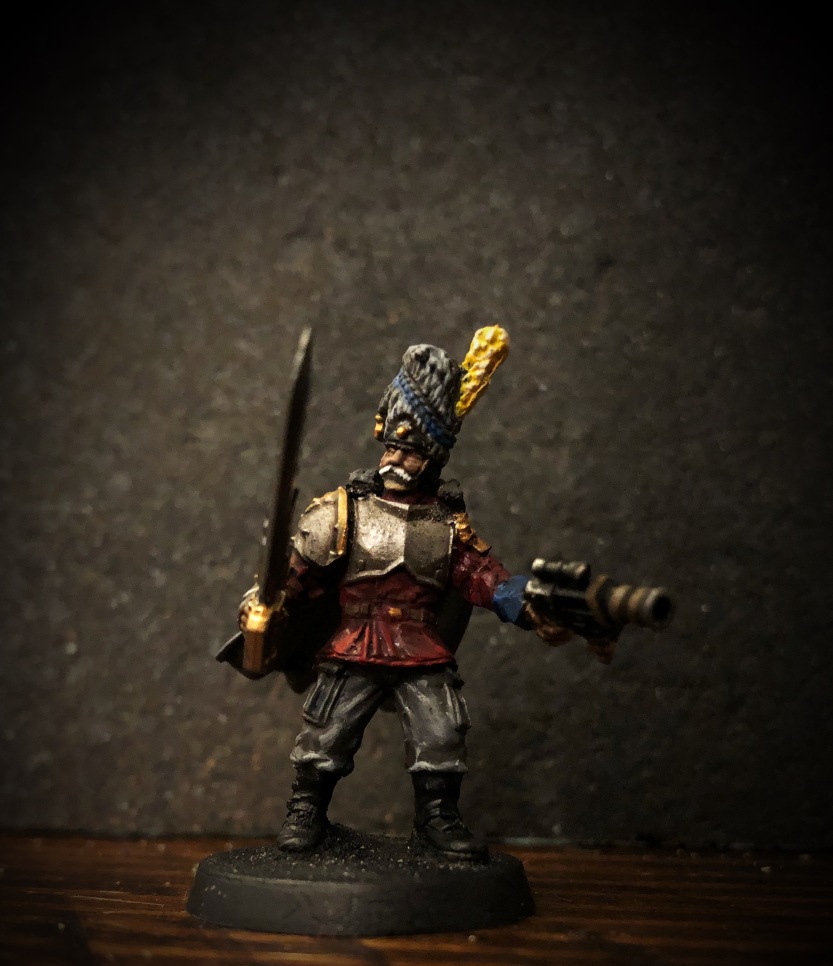 I cut the next fellows head in half at the bridge of his nose. Why in Gods name would you do such a thing? I hear you all scream. Well, so I could give him a blue scarf wrapped around his face. It makes him look like a bandit in my opinion. 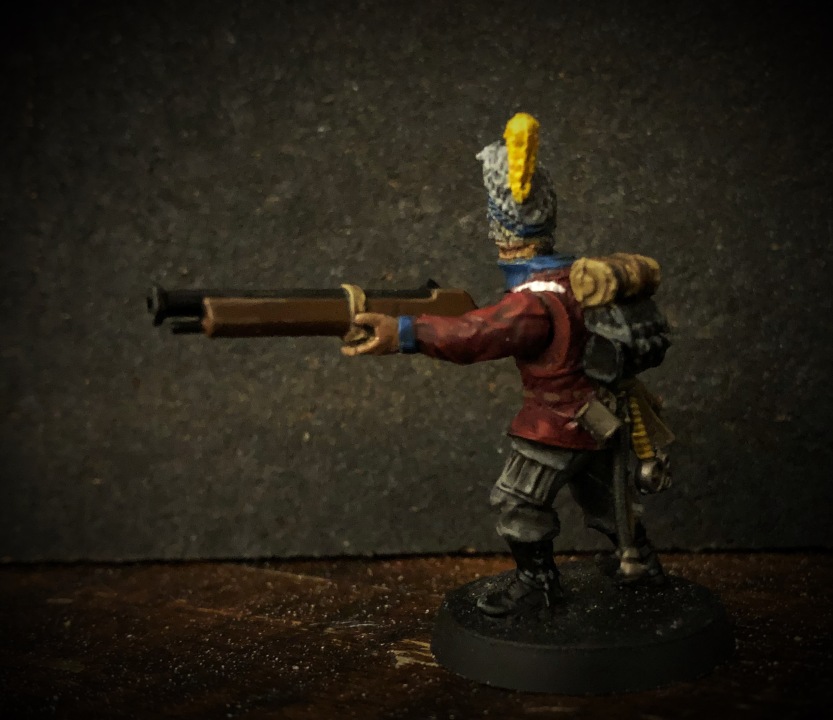 When I showed my wife these top two she asked why they have a slice of pizza stuck to their hats. Sometimes I wonder why I married her haha.

The next veteran is the business. He’s like the Arnold Schwarzenegger of the Praetorian Guard Veterans. Torn off sleeves, bulging biceps and wielding a Bren Gun! Haha. Brilliant. 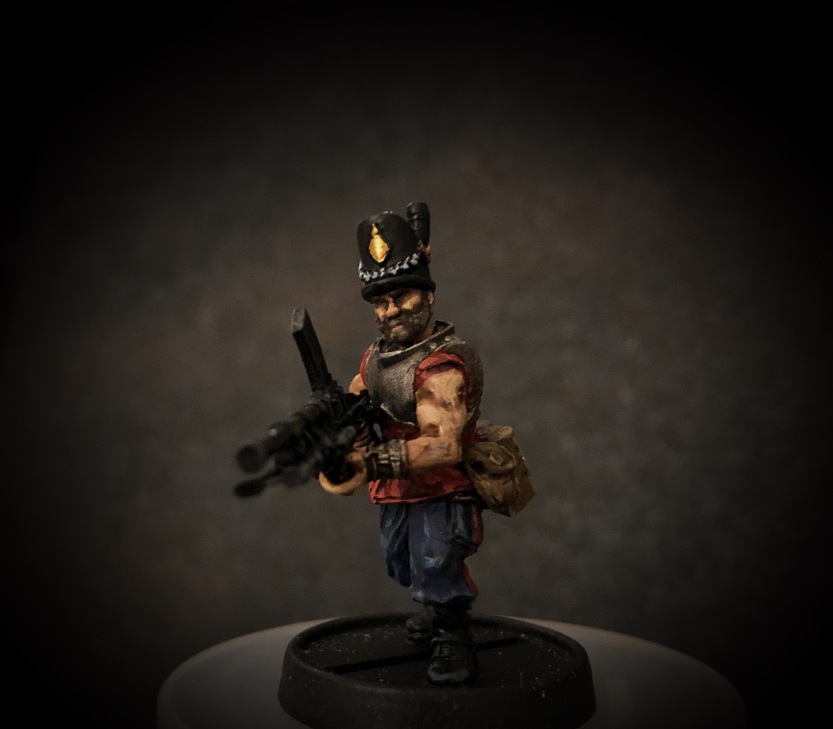 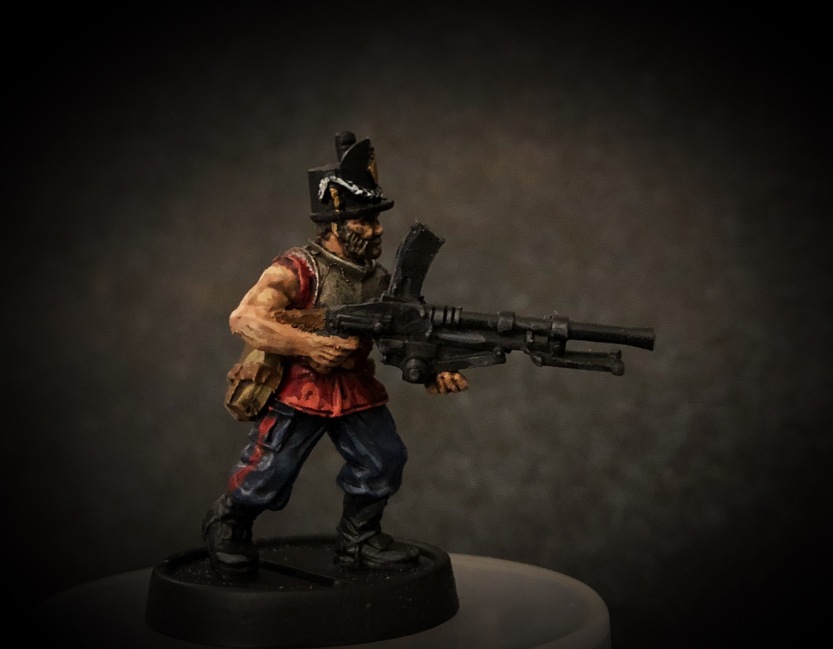 I am yet to base them but will do soon.

I’m on a bit of a roll with these guys so I’ll be painting more over the next week or so.

After finishing these few veterans I fancied painting something bigger so I tackled a walker I’d built for the Gelida Project (now abandoned haha).

I thoroughly enjoyed myself painting this bad boy. I stuck with the theme of Red, White and Blue (British NOT American or French, Cambodian, Croatian… and all the other countries with a red-white-blue flag haha). However, I went for a much darker and more grim look. 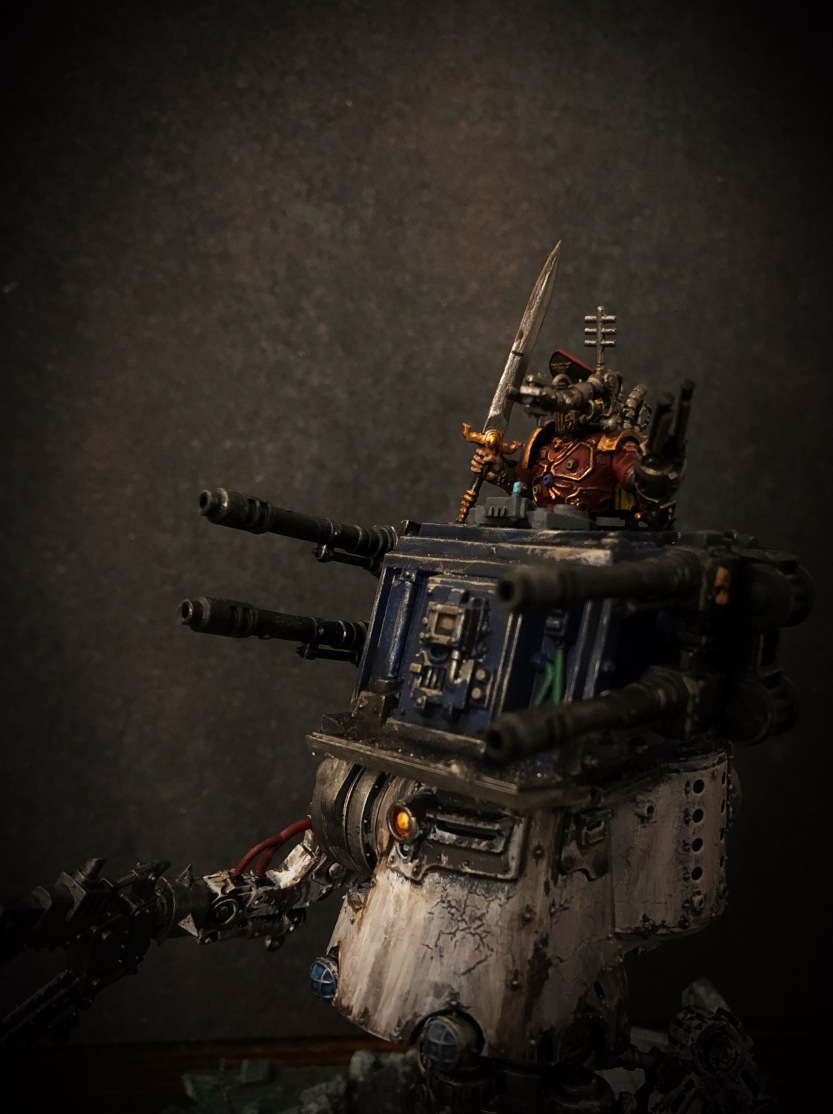 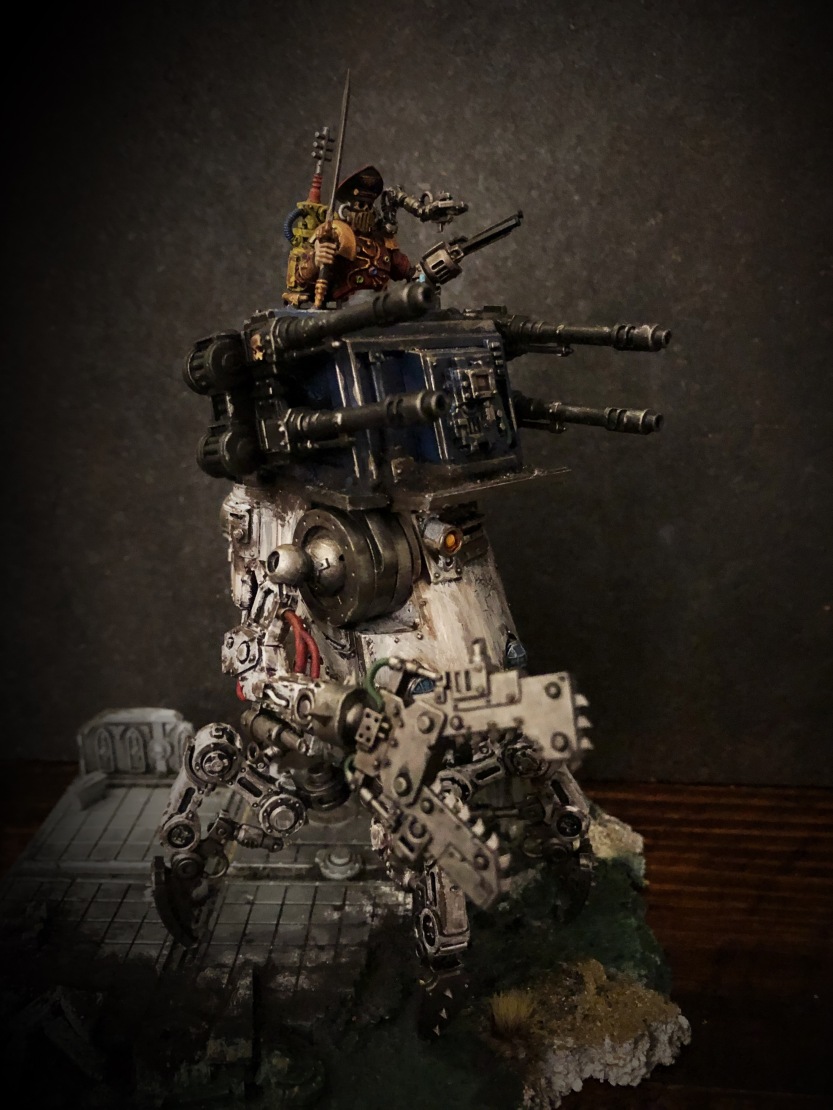 I’ve said it before and I’ll say it again, one of my favourite steps to painting miniatures is the weathering part. There’s something about adding patches of rust, scratches and dust that just floats my boat.

The pilot/driver of Shaka 24 is Major Earl Disraeli (let’s see who knows their history?). He was so much fun to build and paint. I’ve been wanting to use that head for something for aaaaaaages. Works well I reckon. I like his twin gun barrelled left arm. 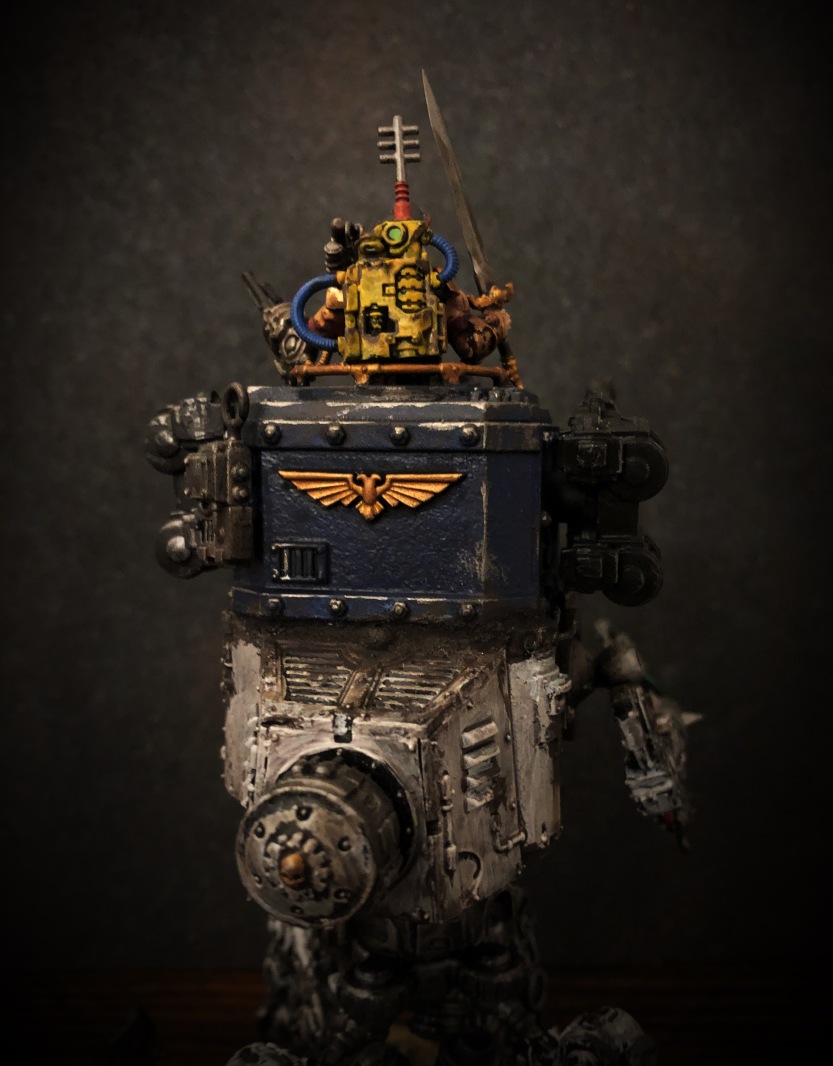 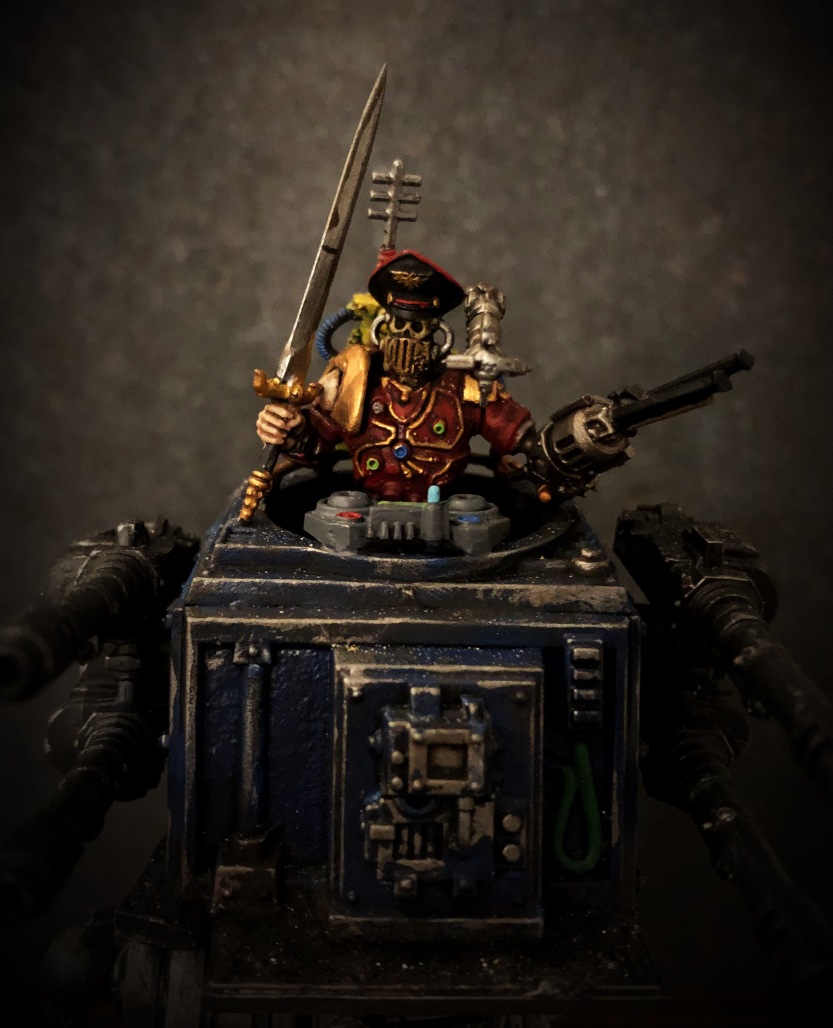 Some more shots for your viewing pleasure. 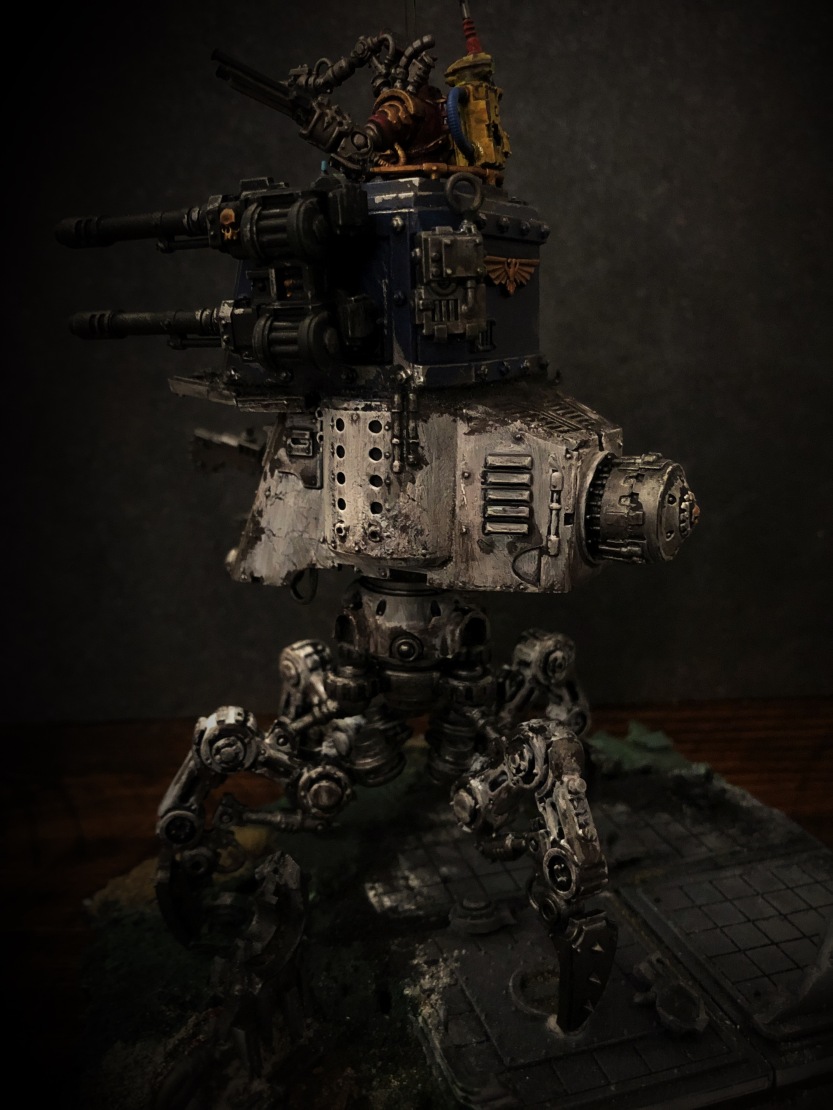 Here’s the base. I was going for a scorched but mouldy look. 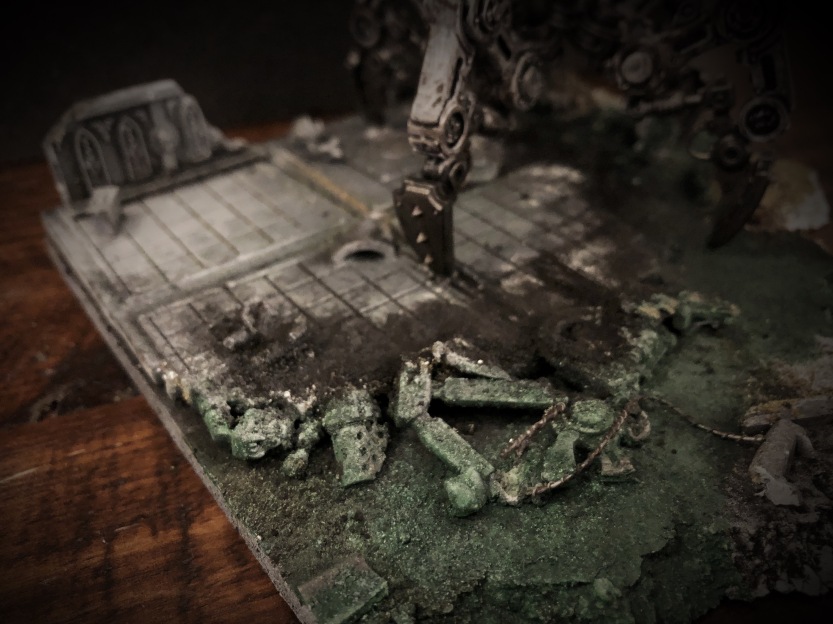 Last but not least is the small but sort of big group shot. 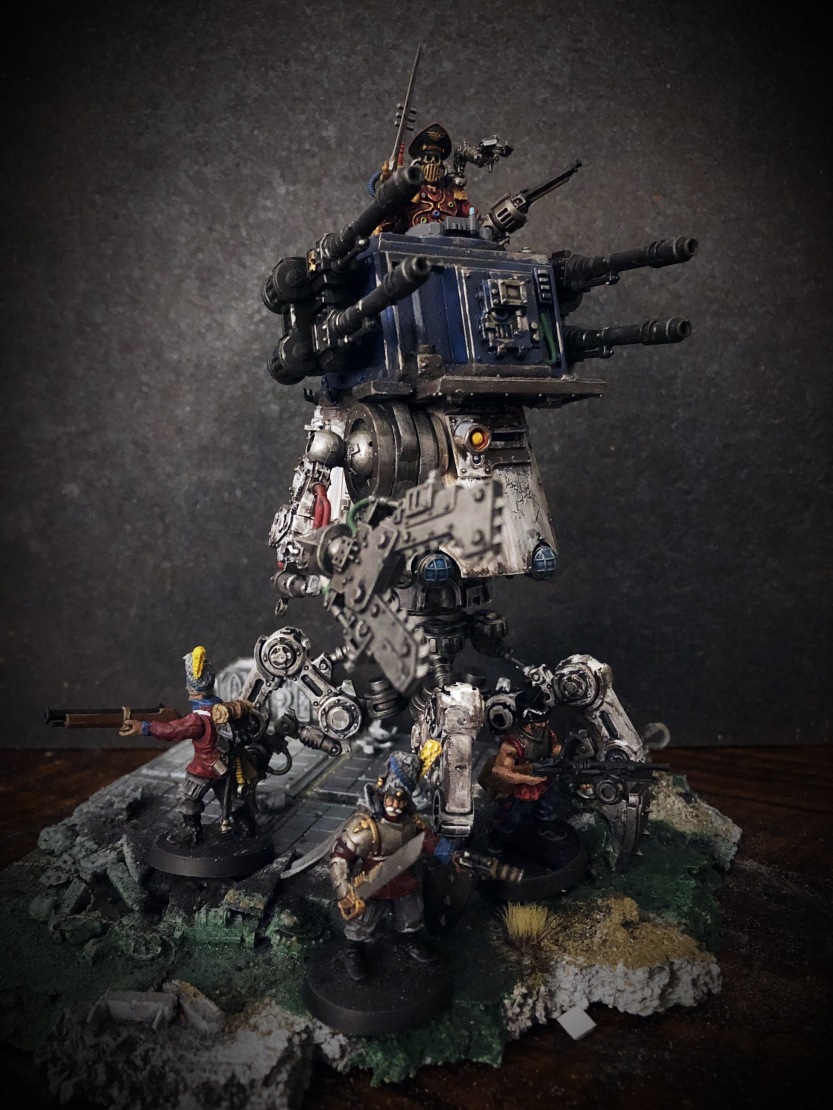 As well as more troops I also want to build a Garrison for the veterans.

Thought I’d include this picture I found on Instagram too. I think we can all relate to it both as adults and when we were kids.

Thanks for stopping by and taking a peek into my crazy, miniature, corner of the web.

28 thoughts on “The Stouthearted Praetorian Guard part 8 – Some veterans and their walker.”