In honour of the great Wudugast and his achievement of finishing off his 100 Ork boyz in 2019, See it here

I have titled this battle report after the famous Scottish battle of Inverlochy. (1645).

Warboss BludBasha of the Albino Blud Lettas addressed his growling mob.
“Tonite we dine in hell lads and Umies are on da menu!” 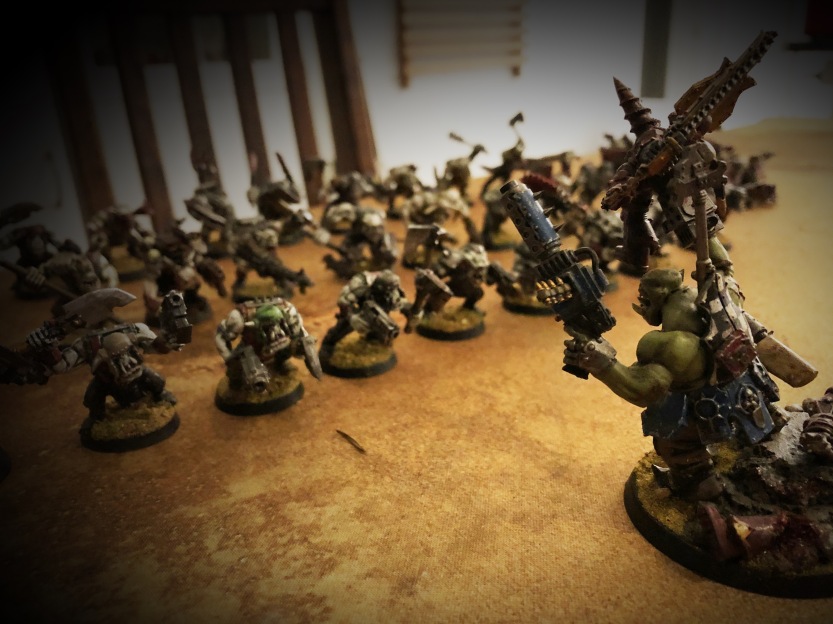 With an eardrum splitting roar the Albino Blud Lettas marched at a quick thudding pace towards the small Imperial Guard watch post on the banks of the InverlOrky quick sand river.

Despite the immense heat of the sun the sky was darkening and the troops inside the IG watch post were weary from a long day of, well, keeping watch.

It was private Zacluster of white squad that heard the thudding first. He was stationed on one of the gangways overlooking the ravine.

He looked out to where the noise was and whispered to his mate private Benjamin. “Oih Benny you dosey prick can you hear that?” Benjamin looked at his mate through weary, bloodshot eyes. He was dog tired as he had been keeping watch for nearly sixteen hours. “No and I just want to go to bed.” However, Benjamin’s eyes suddenly widened when he did hear the thudding and he immediately called down to sergeant Walsh, “Sir, we can hear marching come from 11 o’clock.”

“I sees the dirty umies base lads. You lot head to over dat way wiv the grot car and da rest of us will go down dis way.” BludBasha barked at his albino boyz.

“Sir, there’s a mob on our left flank and a smaller mob with a vehicle to the right.” Zacluster called again. Walsh then relayed the info to his superiors. 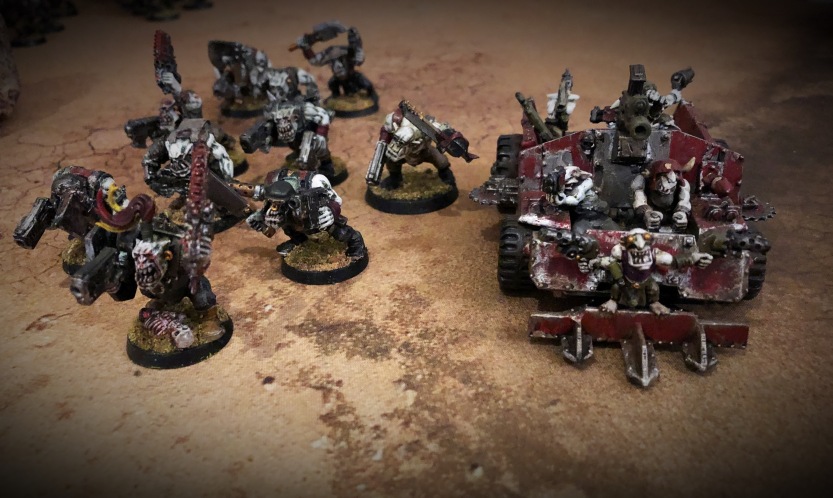 Colonel Jeremiah, Captain Howl and Commissar Garrett took a knee to discuss their options. They called it in to the nearest mothership which wouldn’t reach them for another twenty four hours at least to offer any assistance.

“It’s simple, we hold.” Colonel Jeremiah said. Commissar Garret wondered if that statement was purely because he was standing beside him. The renowned veteran Commissar had heard whispers that Jeremiah was showing subtle signs of weakness in the face of the enemy of late.

“I suggest we send out the Russ Tank to make small work of the Grot vehicle and smaller mob. I also think we send out a squad to man the bridge as it’s the only way across the ravine.” Captain Howl offered. Colonel Jeremiah nodded his approval.

Green squad, who had just started their shift after a four hour rest, felt reasonably refreshed as they marched out of the base over to the foot of the bridge. Squad Leader Markham climbed to the top of the bridge with a single trooper while the rest of the squad spread out at the base.

Sergeant Gunn, the infamous sniper, snuck out into some nearby dead and brittle scrub just out from the north wall of the base. He would offer support to the, now advancing, Leman Russ tank.

White squad spread out across the north and west walls of the base.

Yellow squad mounted the troop carrier truck in anticipation of being sent out into the thick of it if need be. 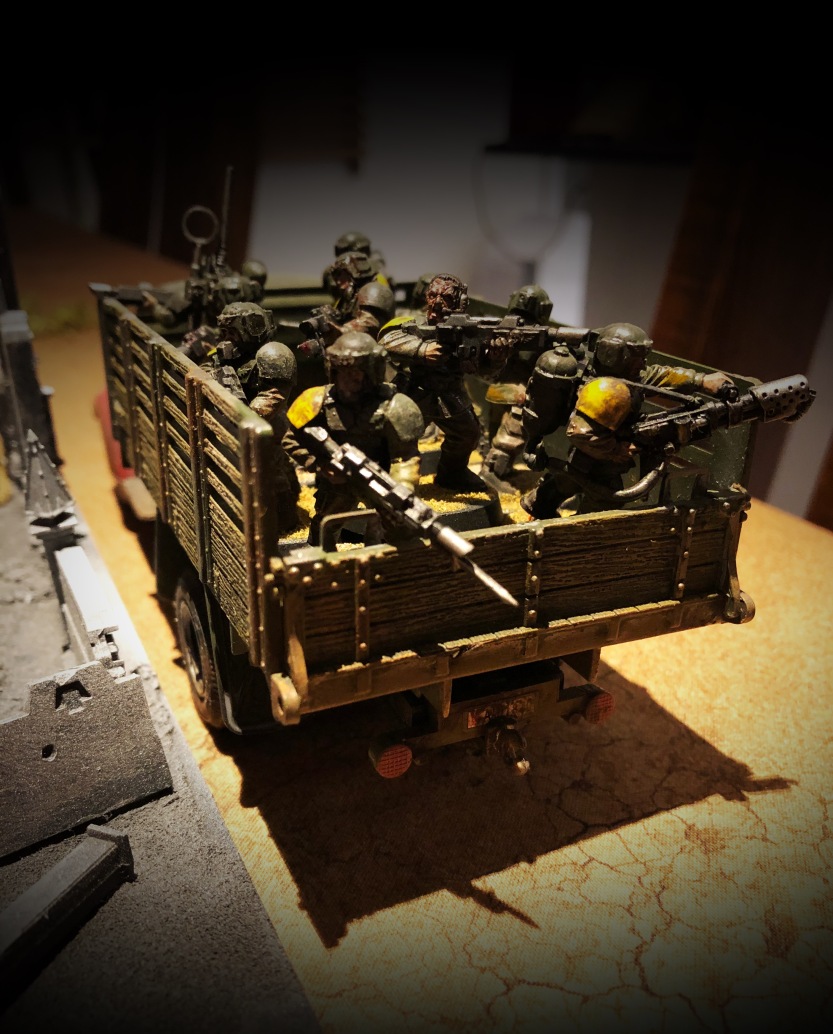 The Grot car was the first to fire when it spotted the ominous leman Russ but its shots were wild and hit nothing but dust. The Russ returned fire and winged the erratically swerving Grot car.

The Orks accompanying the car took cover behind a single small boulder and were still exposed so Sergeant Gunn took some pot shots and took out one of the brutes with a bullet to the cheekbone killing it.

Meanwhile BludBasha and his large mob were advancing quickly towards the bridge. BludBasha smiled broadly and licked his lips when he saw the two Umies on top of it. Snack Time! He thought.

Finally, after over a dozen shots, the Grot car got lucky when a laser bolt shot took out the Russ’s grenade launchers. That was all they did because straight after the Russ blew the annoying little car apart with a direct hit. Then the tank turned its attention to the Orks nearby and took out a swathe of them. Sergeant Gunn dropped another two albinos leaving only one. The lone Ork cowered for a bit before plucking up the courage to charge at the tank. 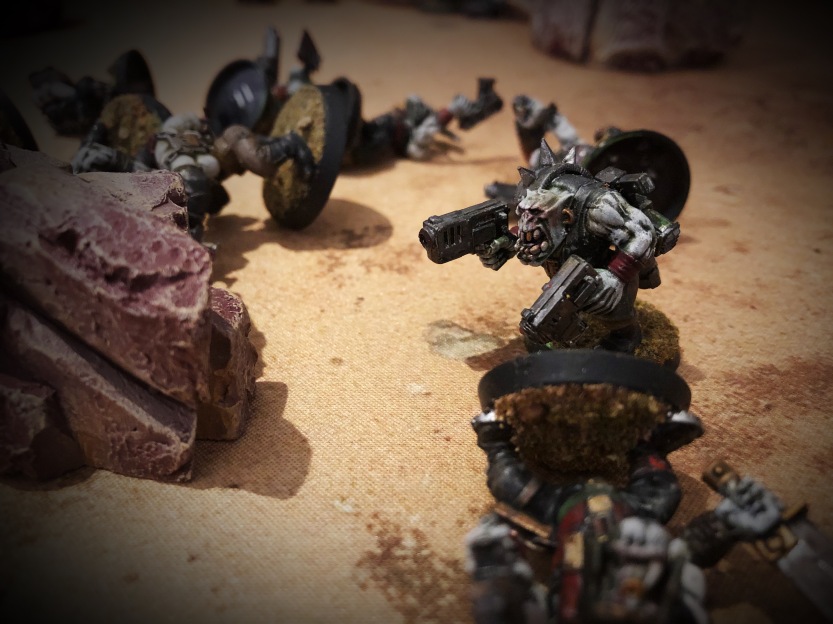 BludBasha fired at the bridge with his big shoota and killed both the squad leader and the trooper. The rest of green squad opened fire as one from their position at the foot of the bridge. Unfortunately their aim was a little off and after a volley of over thirty shots they only killed two Albino brutes.

Feeling the buzz of battle, BludBasha charged up the bridge and fired down at green squad killing nearly all of them. The flamer trooper and grenade launcher trooper remained and they held their ground, aimed their weapons and fired at the crazed Warboss. They managed to wound the pale green monster but this only seemed to infuriate him. He opened fire from the hip and blew the Cadian Guardsmen to smitherines. He was about to roar with joy when he heard a loud clank. He looked down to see a large iron dreadnought making its way up the bridge. BludBasha smiled. He liked a good old fashioned fist fight.

The Dreadnought and the Warboss exchanged blow after blow but BludBasha was faster and ended up hurling the iron beast off the bridge and roared when it exploded.

Sergeant Gunn took out the single charging Ork and then turned his attention to the large mob on the other side of the ravine. They were just within range so he did what he could. 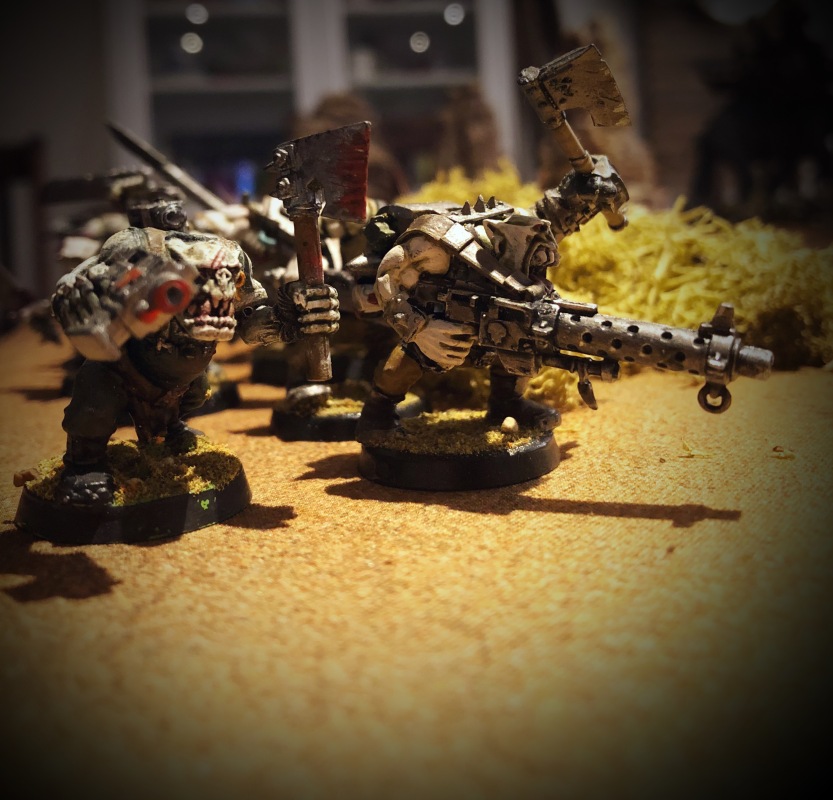 The Russ was just about to turn and go back to base when more thudding was heard but this was much louder than the approaching Orks had been.

Then, the crew inside the tank saw it on their scanners. Something huge and organic was moving very fast straight at them. Tank Commander Dean pushes up the turret hatch to take a peak and his jaw dropped. Only 100m’s away and closing was a giant elephant that had a small but angry mob of Orks mounted to its back.

It was too late…

The giant elephant charged, Tusk first, into the tank, flipped it and then trampled it crushing and killing the occupants.

It then fired off one of its rockets from a crossbow and killed both Private Benjamin and Private Zacluster. 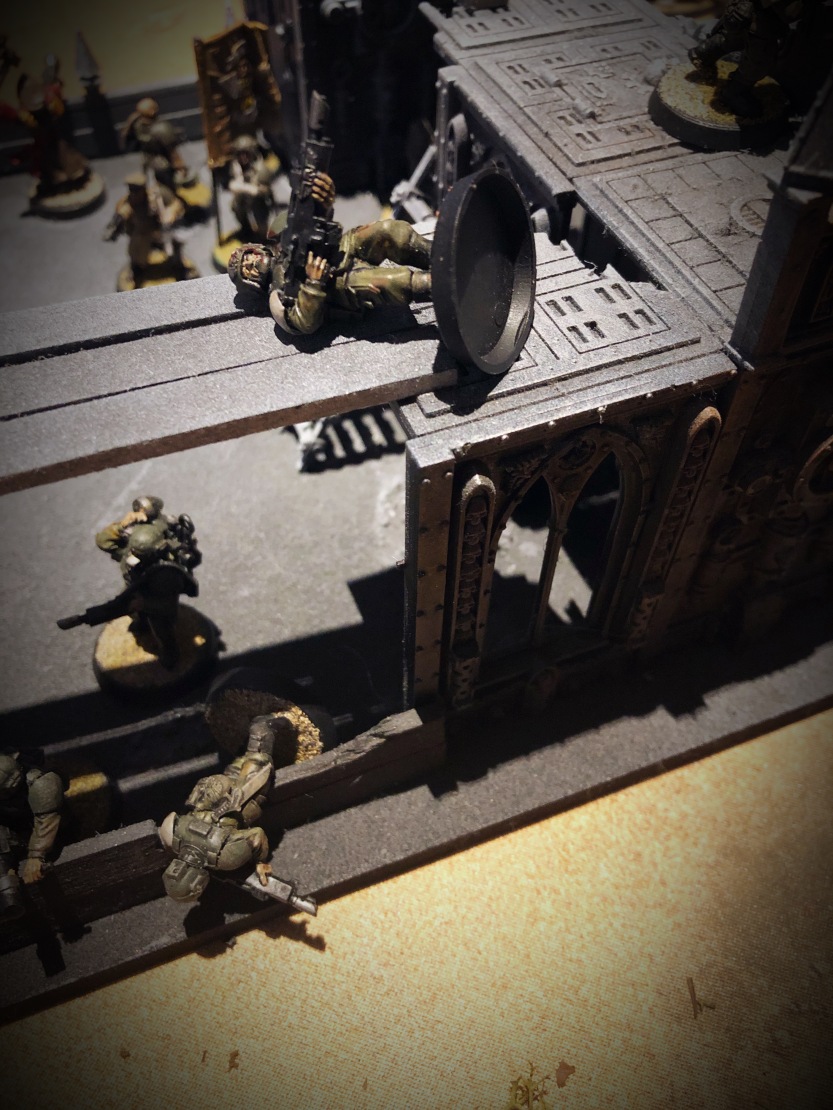 “Who’s next?” BludBasha called out to the watch base from the bridge.

Commissar Garrett looked at Colonel Jeremiah who had gone to pieces after the giant elephant turned up. “I knew it, you’re a coward Jeremiah. I will deal with you after I’ve dealt with the xenos scum at our door.” Garrett scalded.

“Yellow Squad, lets roll.” Garrett called and he climbed into the troop carrier and drove the bridge. The squad dismounted and took up firing positions as the Ork Warboss started to lope down at them. Garrett climbed up onto the roof of the trucks cab and fired three lethal shots from his plasma gun. BludBashas expression went from one of joyous victory to dismay. He looked down at the three sizzling holes in his chest. Then he collapsed to the bridge dead. 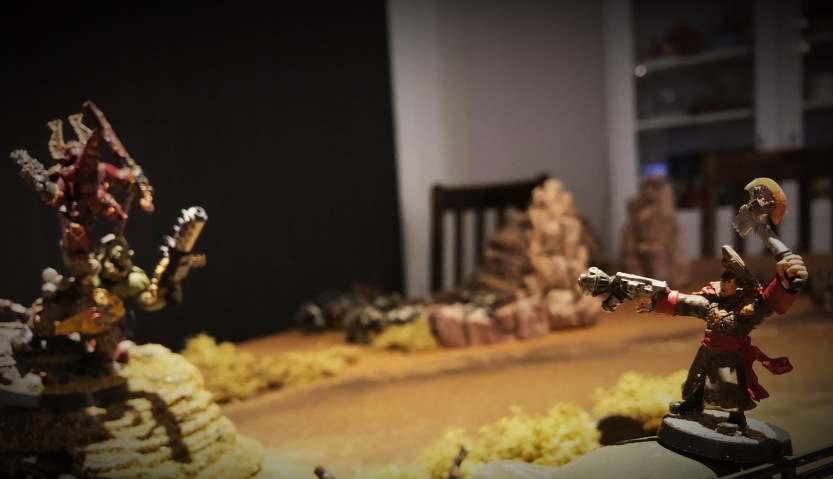 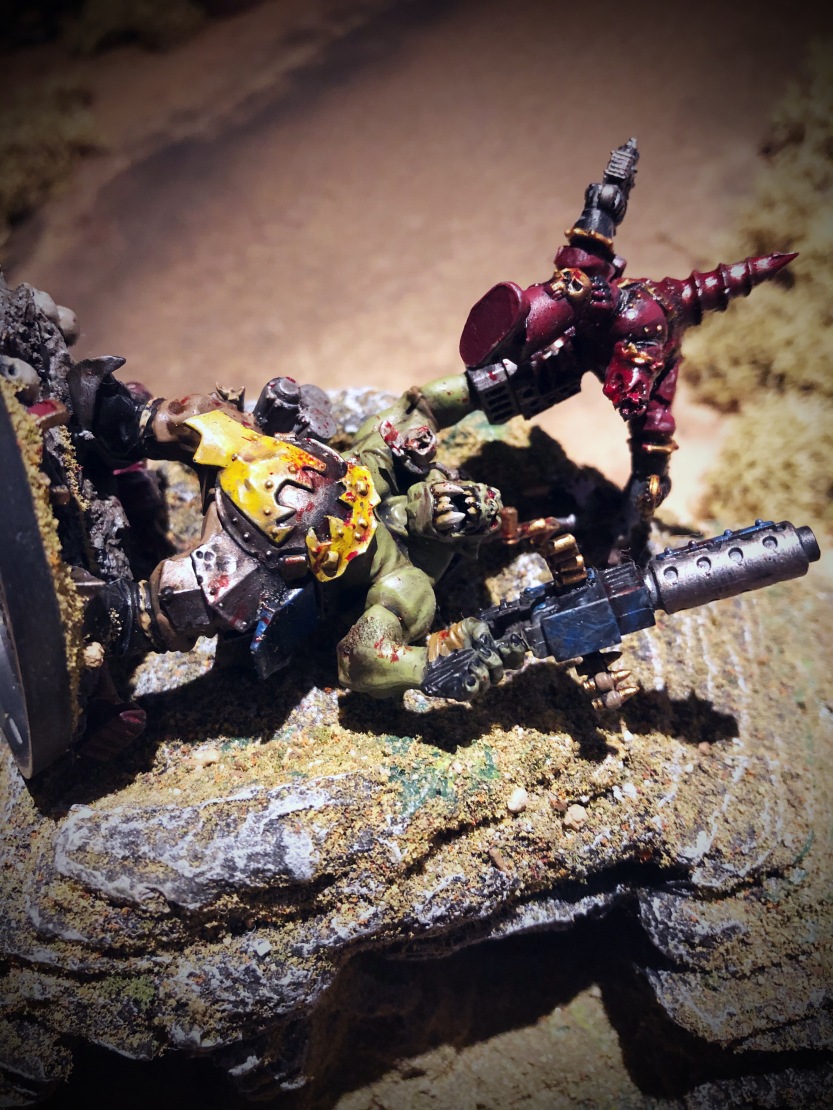 The Orks close behind couldn’t believe what they just witnessed and froze. This allowed yellow squad enough time to get over the bridge and charge the Albino dogs. “KILL EM ALL!” Lieutenant Cassius of yellow squad called and vicious hand to hand combat ensued.

At first yellow squad took a couple of casualties and it looked as though the courage was starting to dwindle but then one lone trooper killed three Mighty Orks single handedly and this bolstered the rest of the men’s courage and determination. A few minutes later and all the Orks were dead.

The elephant with its Orky cargo suddenly turned and started to walk back the way it had come. Sergeant Gunn, the sniper, could hear the Orks screaming at the beast to attack but it ignored them and simply loped away.

A cheer went up amongst the surviving guardsmen at the surprising turn of events. All of them had feared that huge elephant monster but it clearly had a mind of its own.

Commissar Garrett went back into the watch base and found Colonel Jeremiah sitting on a crate smoking.

“A good outcome Colonel.” Garrett said as he unclipped his combat axe from his belt. Jeremiah saw the action and gulped. He knew what was coming and simply fell to his knees and put his hands over his face. With one hard swipe Garrett cut Jeremiahs head free from his skinny neck.

24 thoughts on “The Battle of InverlORKY – Solo Battle Report”