A blogger buddy suffered a great loss recently and at times like this there’s no words and nothing that anyone can say or do to fix it. However, I hope this small gesture will let him know that I am thinking of him.

You walk a line as best you can

You expect the ups, downs and turns

The people around you keep you strong

In the darkness their light burns

You are the pillar of strength with no time to weep

The love around will help you to mend

It’s time for goodbye but it’s never the end

You guys might remember I did a diorama last year with my three daughters on top of a VW beetle. This next diorama/scene is set ten years later.

There’s a saying… “When the dust settles, you realise it’s really not as bad as you thought it was.”

What if it was worse?

The three girls, hardened veterans of a zombie post apocalyptic world, pull up in their individual vehicles just beside “Cage IV”. 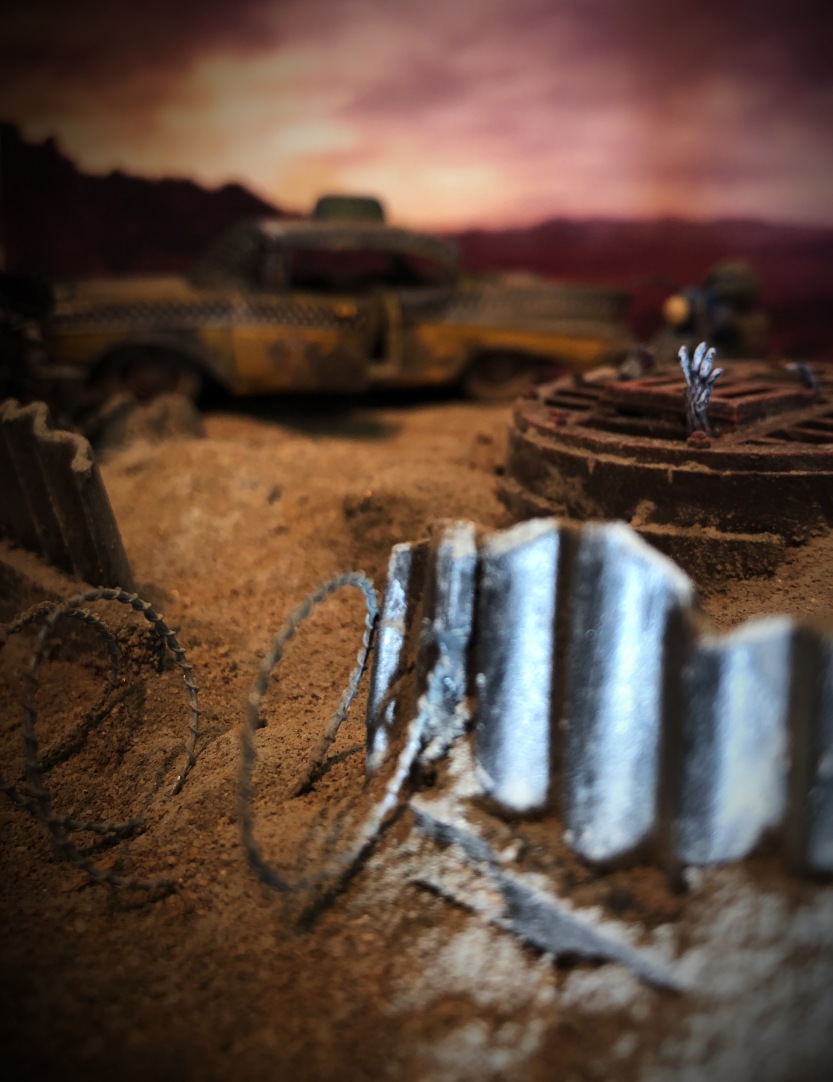 Willow got out of her ride first, an old Chevy Taxi, manoeuvred over to the cage, took a knee and then peaked in at it’s occupants. Willow is all business all the time and doesn’t take her warden duties lightly. She smirked down at the pale fleshed and moaning zombies, taking a grim satisfaction from their frustration at being trapped and wishing she could put a bullet in each of their skulls. The young warden warrior doesn’t hold much hope for a cure for these undead creatures but it’s not her job to worry about such things. Her job, and that of her sisters, is to hunt, capture and secure zombies so they can be injected by Doctor Roland and his crew. Then it’s up to Willow and the other girls to keep a check on the captives and report on any significant changes. 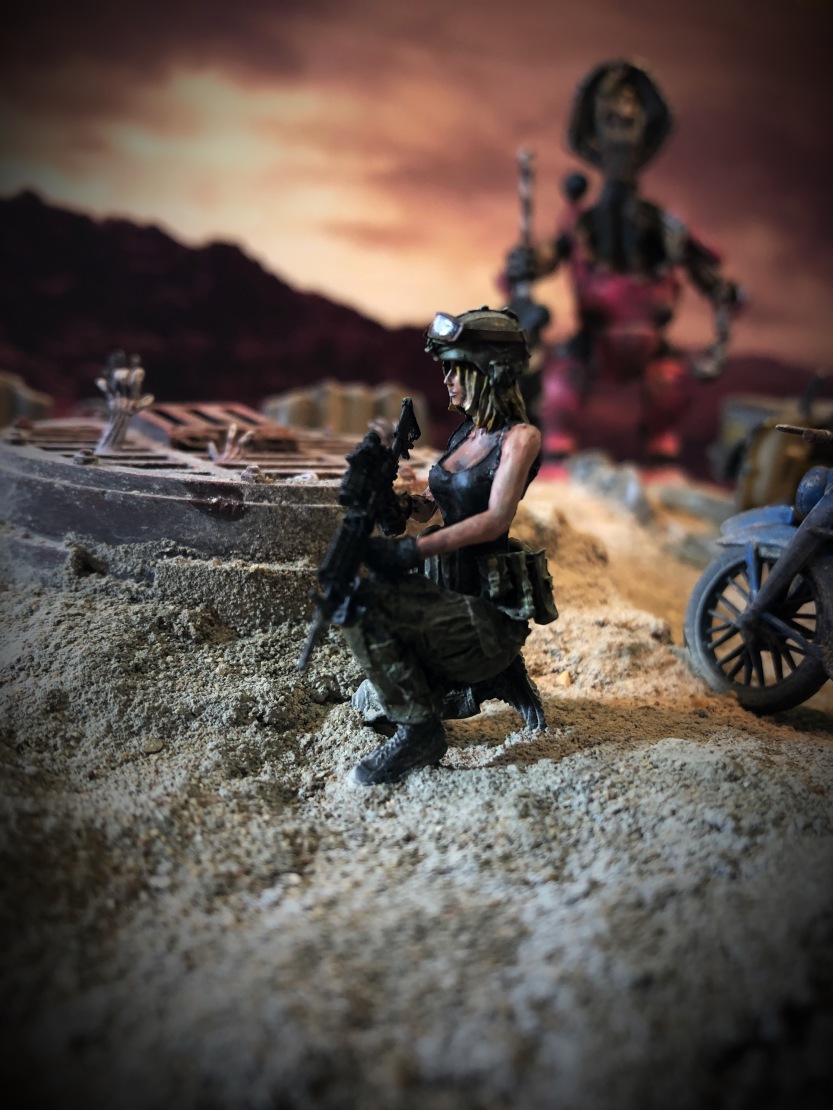 The clunky but, surprisingly, agile pink robot known as “Candy” thudded to a stop, in front of the taxi, and it’s hatch, immediately, sprung open. Holding onto the internal hatch-handle and stretching at the same time was, the comic relief of the trio, Sianne. She blew a bubble from her gum and said, “It’s as sweaty as a redneck with a mortgage in there.” 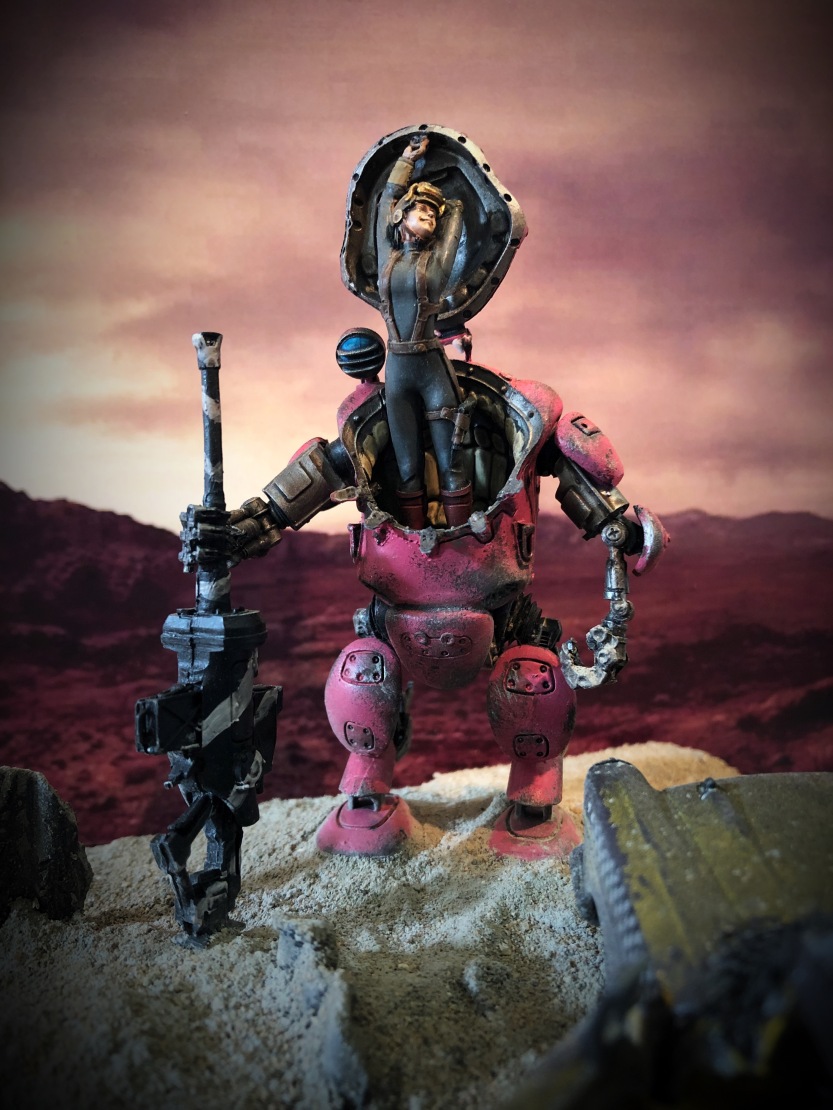 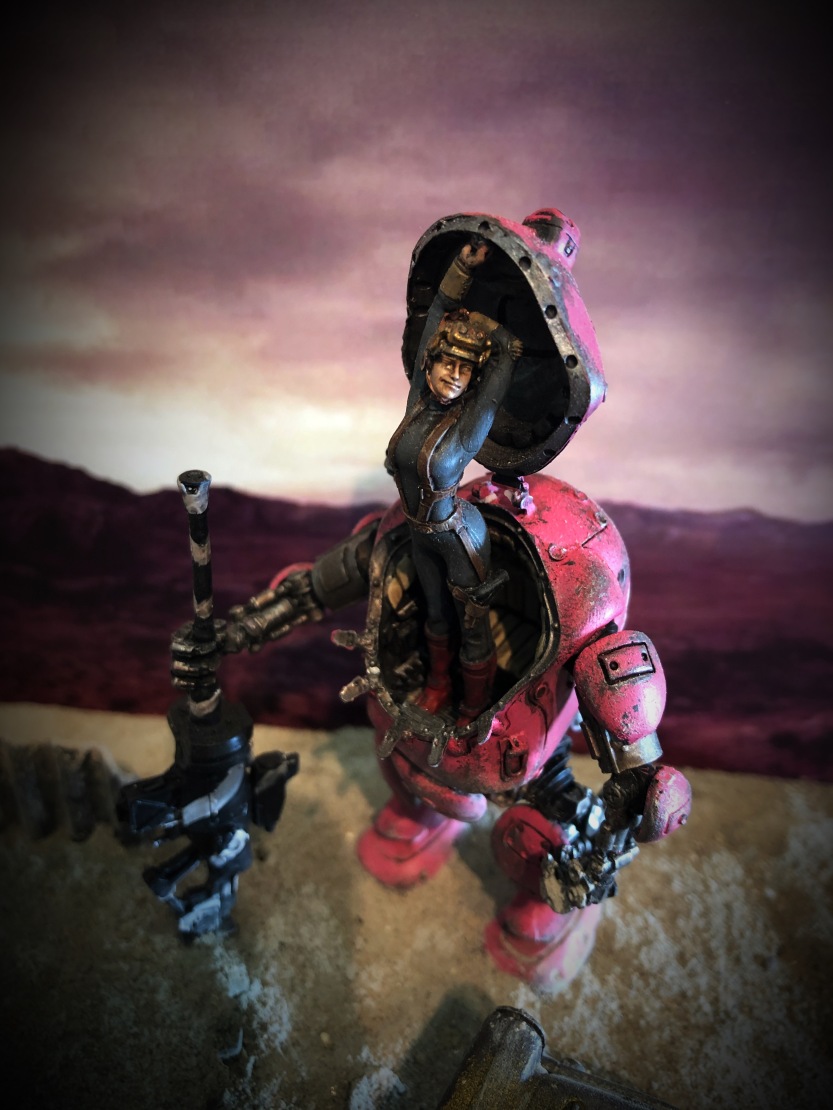 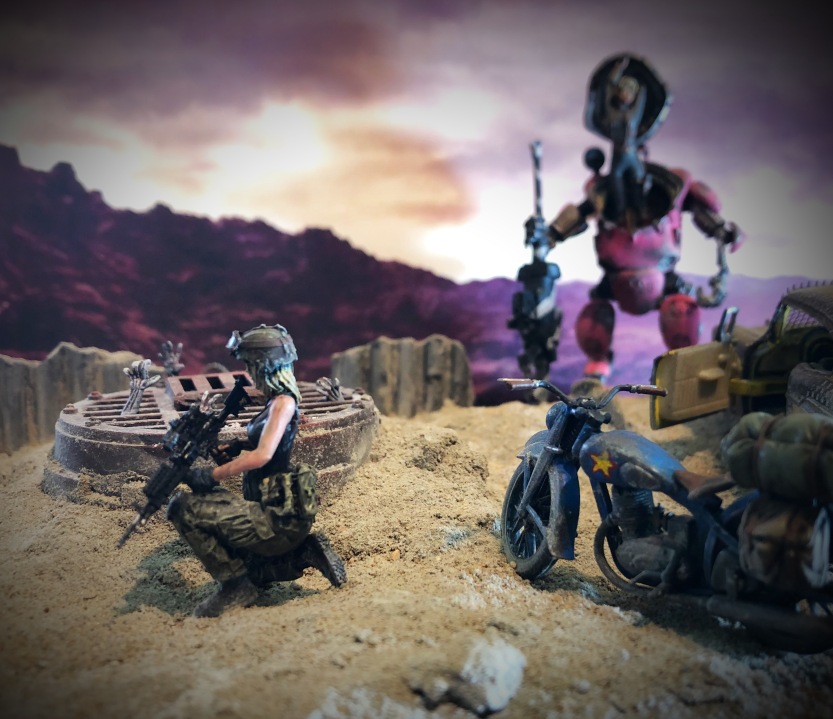 The oldest of the trio, known simply as Kiki, pulled up directly behind Willow on her motorcycle. Being a bit more tentative in nature she strode over to an old crate, stepped up onto it and scanned the area, her gun at the ready. For the last ten years she’s looked after her sisters by being careful, observant and vigilant. 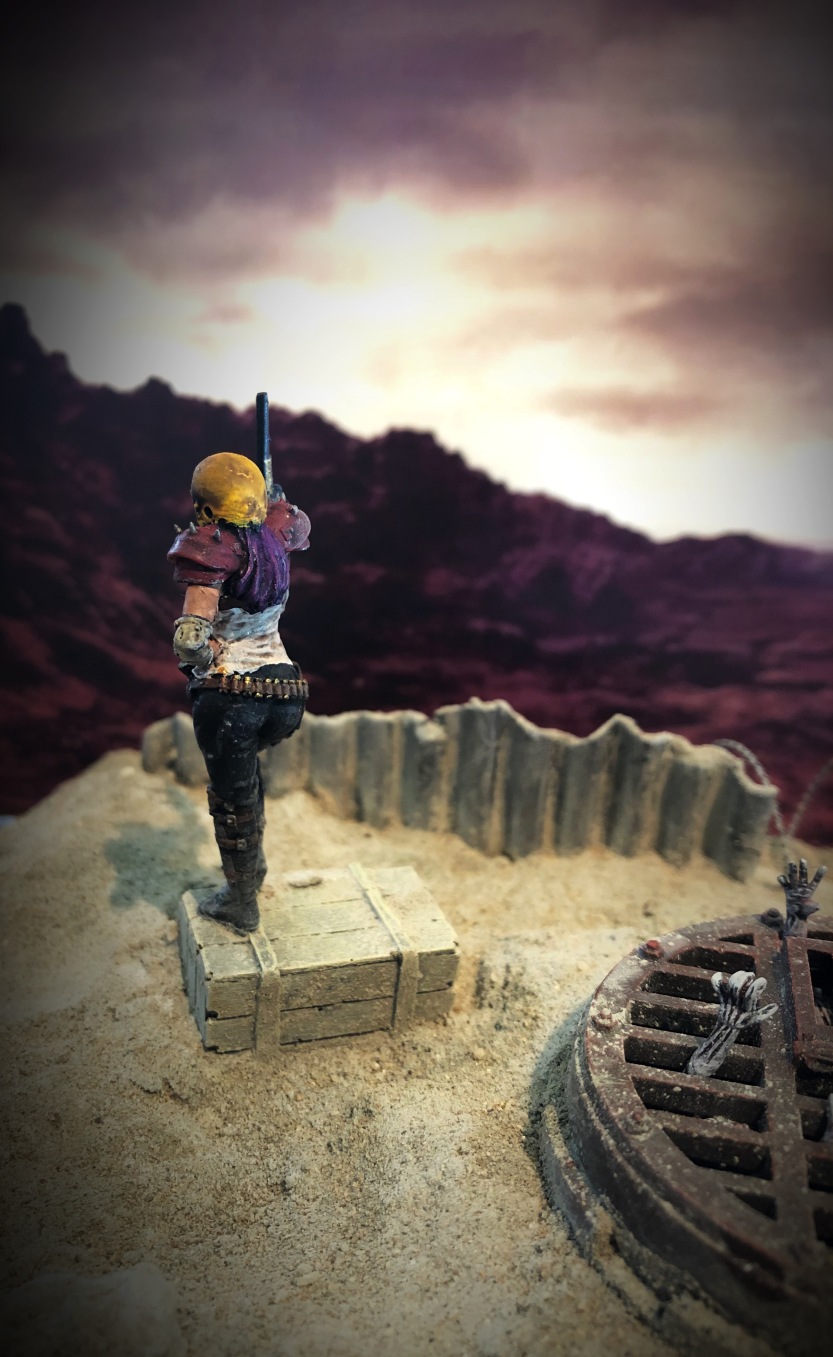 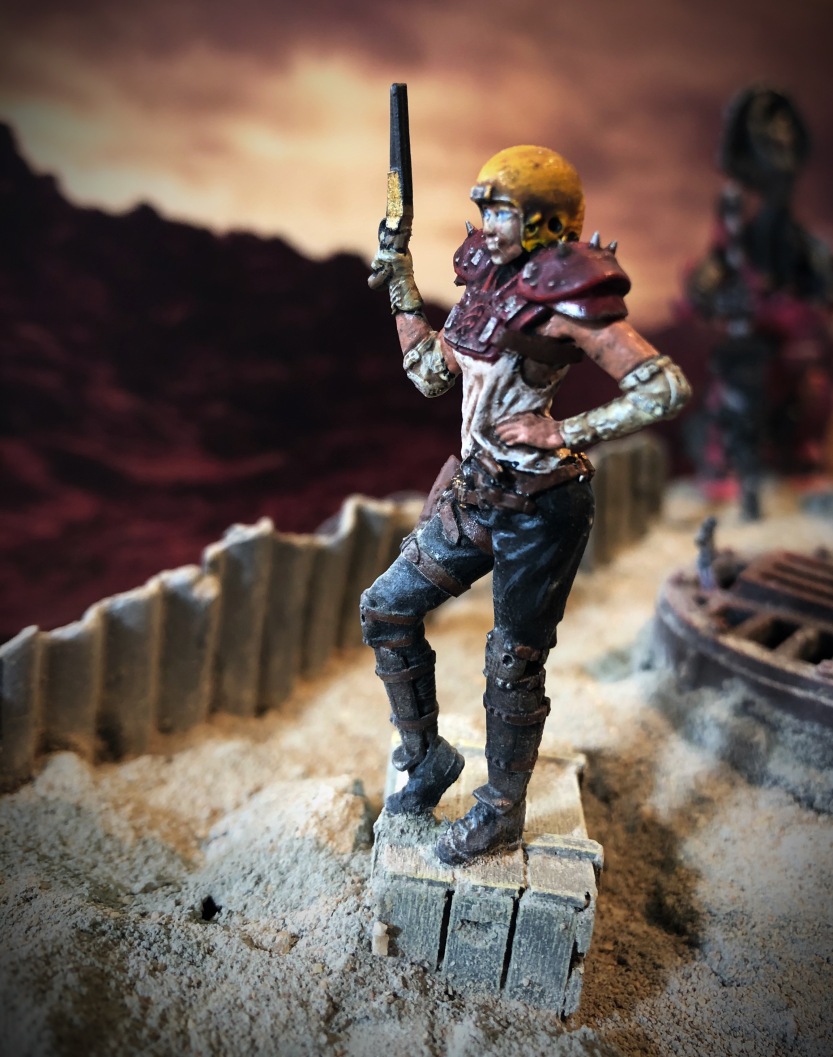 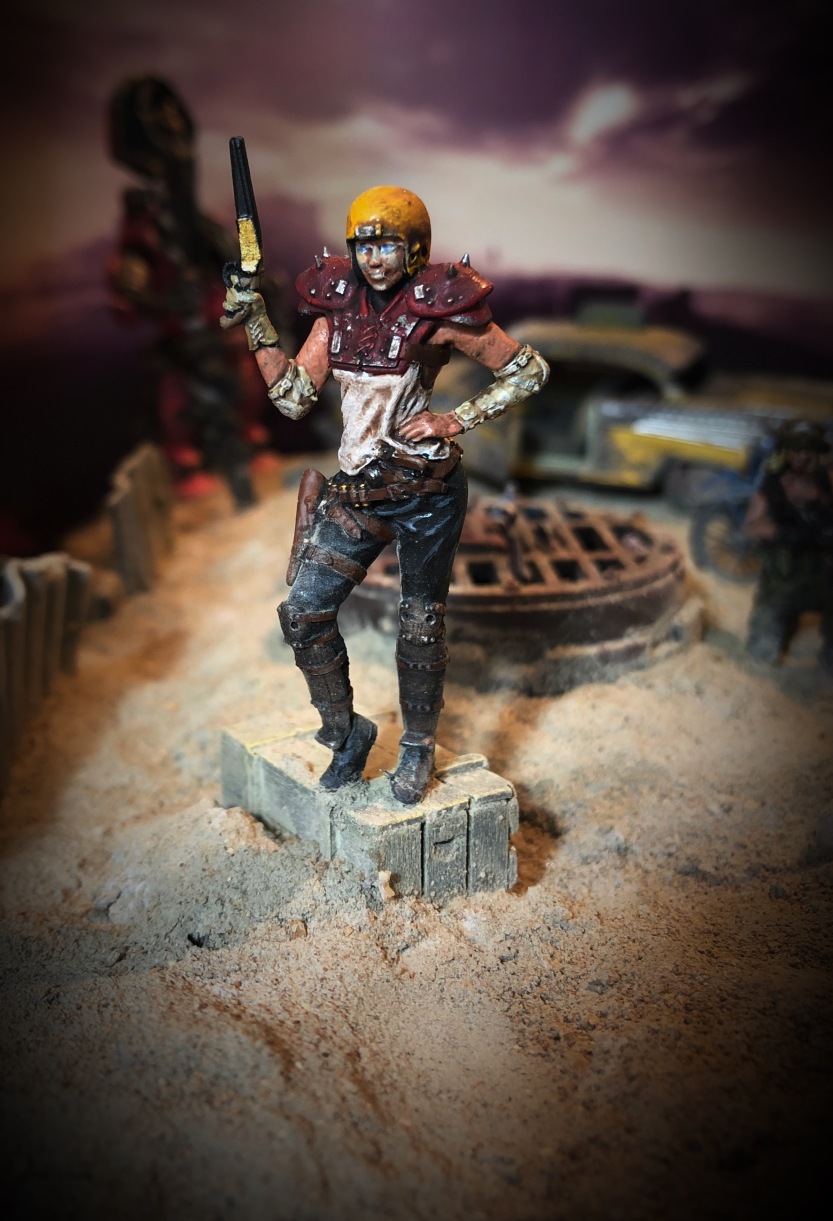 “No change to this lot.” Willow called to the others.

Just then Kiki heard a low rumble from the East and knew, instinctively, what it was. “We’ve got a dust storm coming girls.” She called out.

Sianne rolled her eyes. Blew another bubble and then, hastily, pulled back down the robots top hatch and slumped into her seat. She checked her scanners knowing full well that when a dust storm blew in so did a zombie horde. “It’s like Mother Nature is working with these zombie mother fuckers.” She whispered into her headset. She then hit the ignition button and Candy the robot started to lope off in the same direction Kiki was already heading on her motorcycle.

Willow took one last look at the undead abominations in the cage and wondered when all this madness would be over, or if it ever would be? She climbed in behind the wheel of her taxi and gunned the engine, taking off in a cloud of dust.

The zombies locked up below in the pit-cage hissed, growled and screamed with an intensity that grew as the dust storm, along with the horde, came closer and closer. 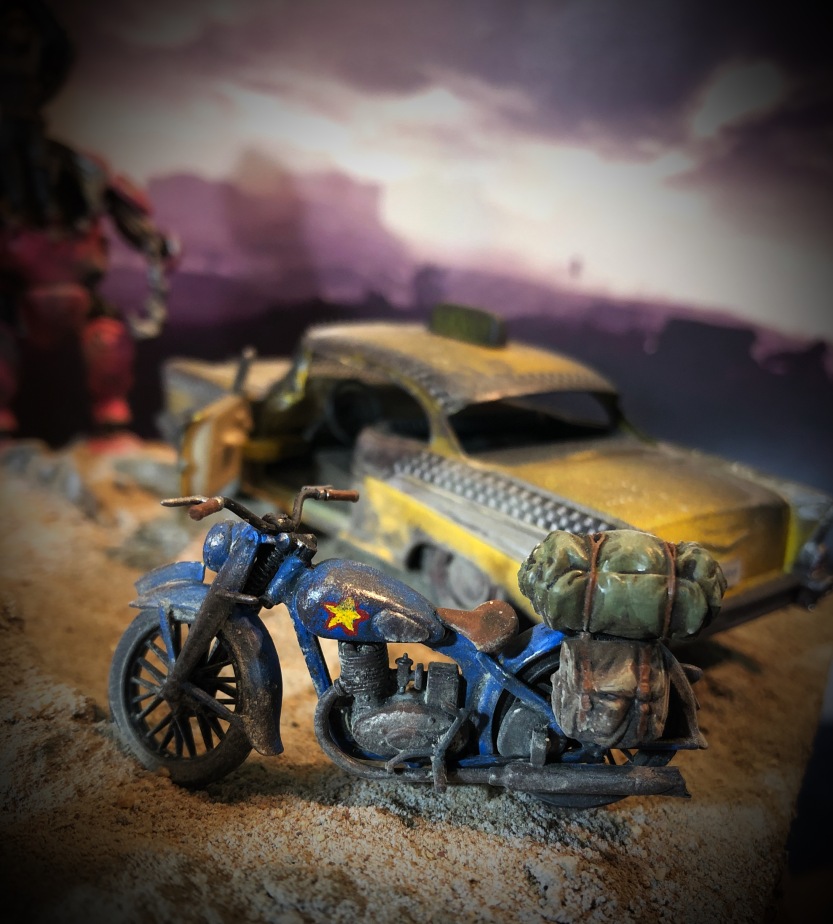 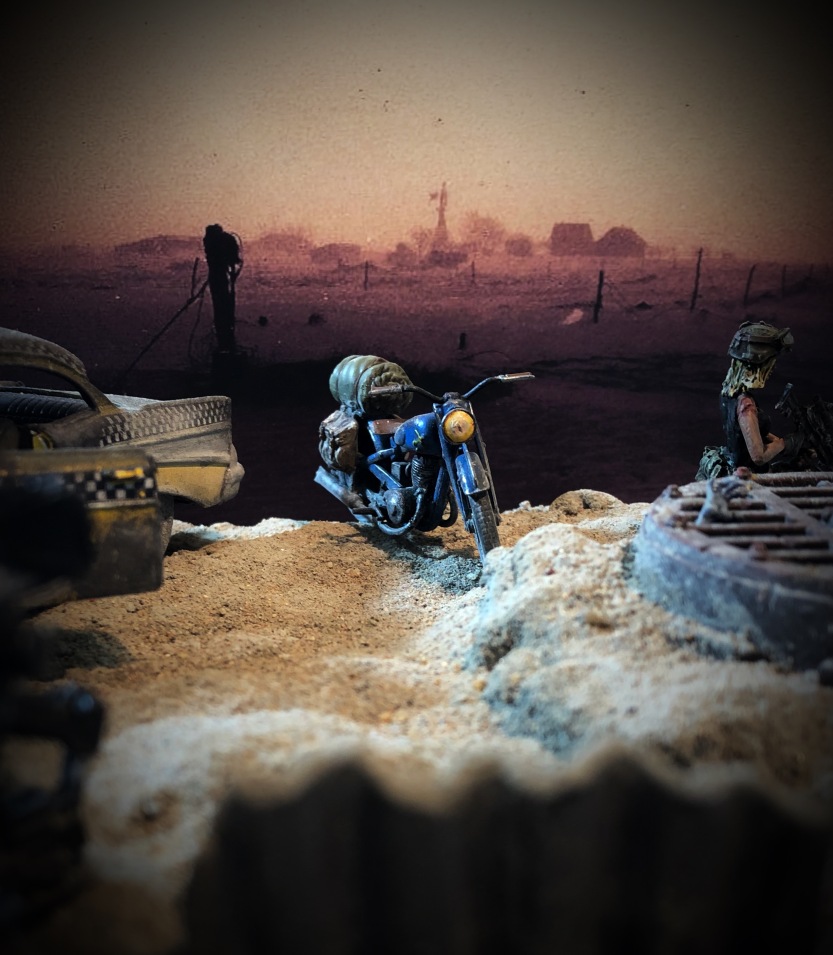 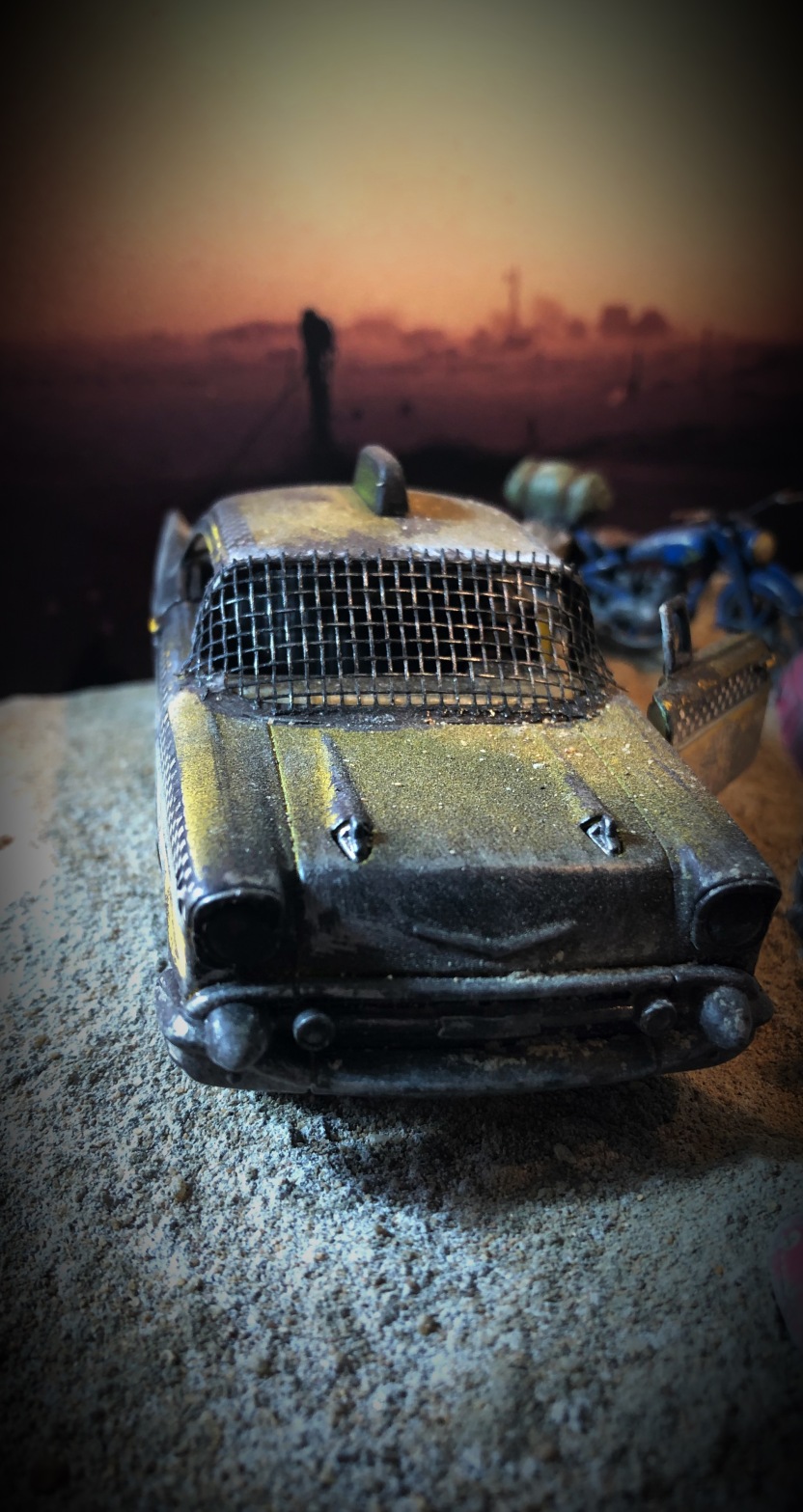 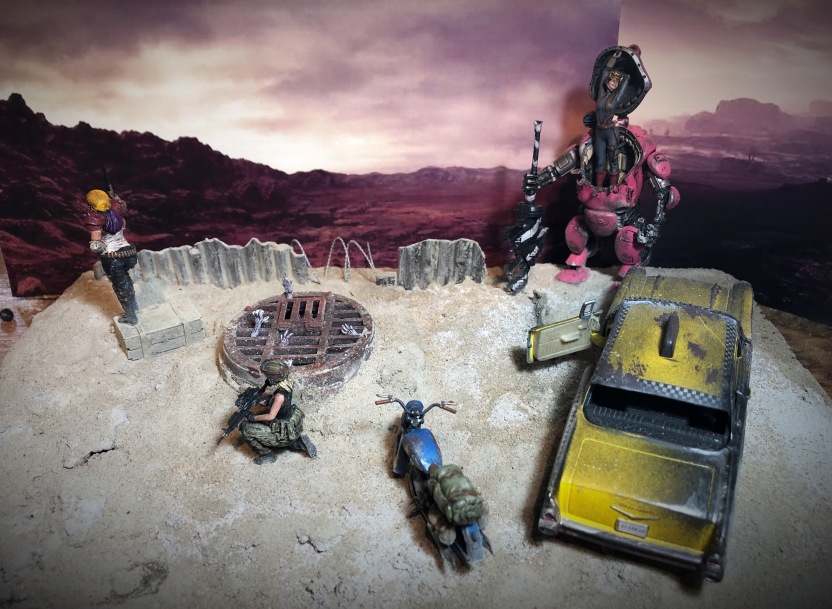 I had so much fun with this diorama, especially when it came to “Candy” the pink robot. It’s 1/35 scale, as is the rest of the diorama, and came with no instructions so it meant I had to work from a picture on line which was, mildly, challenging but kind of fun too. I wanted the robot to be girly but hardcore at the same time, just like my daughter Sianne. When it came to painting Candy I didn’t have a pink so I mixed my own and loved the darker/dirtier shade I achieved.

The taxi is die-cast metal and plastic. I pulled the whole thing apart so I could paint the seats black. I went for a weathered and partly burnt look to the old Chevy and used fly screen mesh for the makeshift windscreen. I really like how the taxi turned out.

The motorcycle is a German World War Two model kit that I heavily weathered. I went with blue and did a freehand star just to make it look like Kiki had painted it herself.

The cage/pit/drain thing is a piece of terrain from GW and was an afterthought when it came to the diorama. Originally I was going to have zombies surrounding the girls but that’s pretty much what I did last year. I was pretty excited when I thought of the idea of having the zombies in the cage clawing through the bars.

I wanted the whole thing to look thick with dust so I used an old bag of grout I’ve had kicking around the hobby room. I used pva and spray adhesive then dumped and sprinkled grout everywhere. Now that was fun! So the colour you see on the ground is the actual colour of the grout. No paint or wash added at all.

The corrugated iron fence was actually a piece of plastic I found at a clients place after I ran it over with the lawnmower. I don’t know what it was originally but as soon as I picked it up I knew I’d use it one day haha.

The base is an old piece of timber I found under the house.

Finally, the backdrop was a bit of an afterthought as well but worked out really well I reckon. I found three images on line and then adjusted the colour, brightness, contrast and warmth of each one so they all tied in together. I think the backdrop really sets a certain mood for the whole diorama.

So folks, this is my submission into Alex’s annual Fembruary challenge – https://leadballoony.com/2020/02/03/leadballoonys-3rd-fembruary-challenge/

I’m quite proud of this one, if I do say so myself, and had so much fun putting it all together. I haven’t done a 1/35 scale diorama since I was a kid and now my mind is planning ahead for more.

I hope you like what I’ve done here. Be sure to check out all the submissions once Alex has collated them and put them into one big tasty post.

Here are some fun key shots that I got a little “arty farty” with. 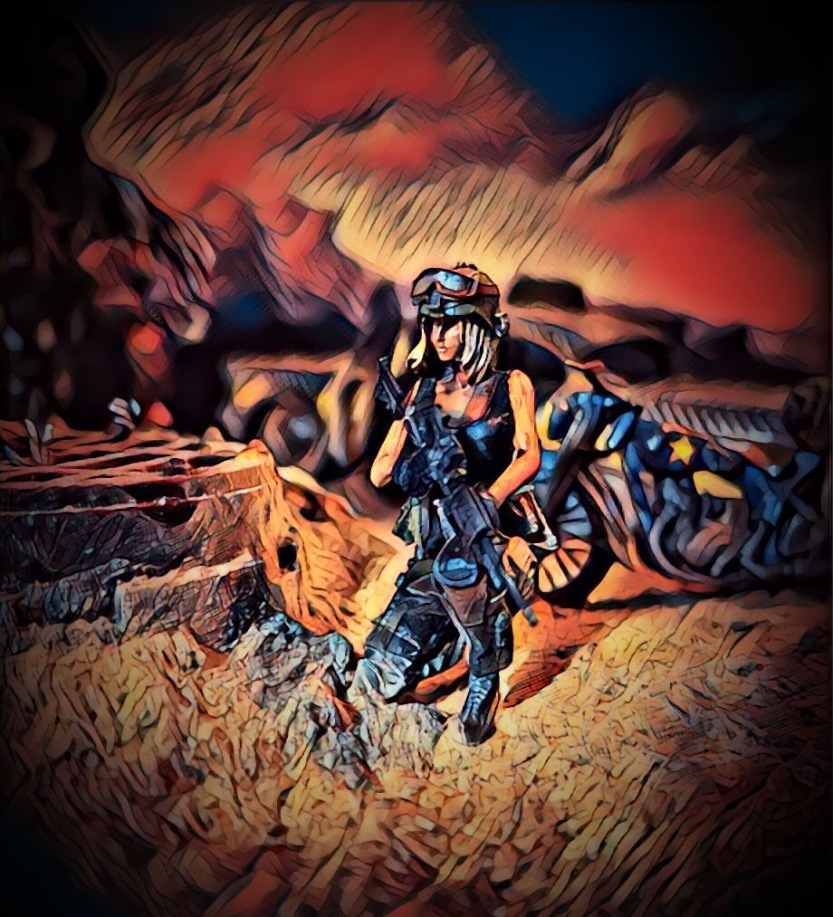 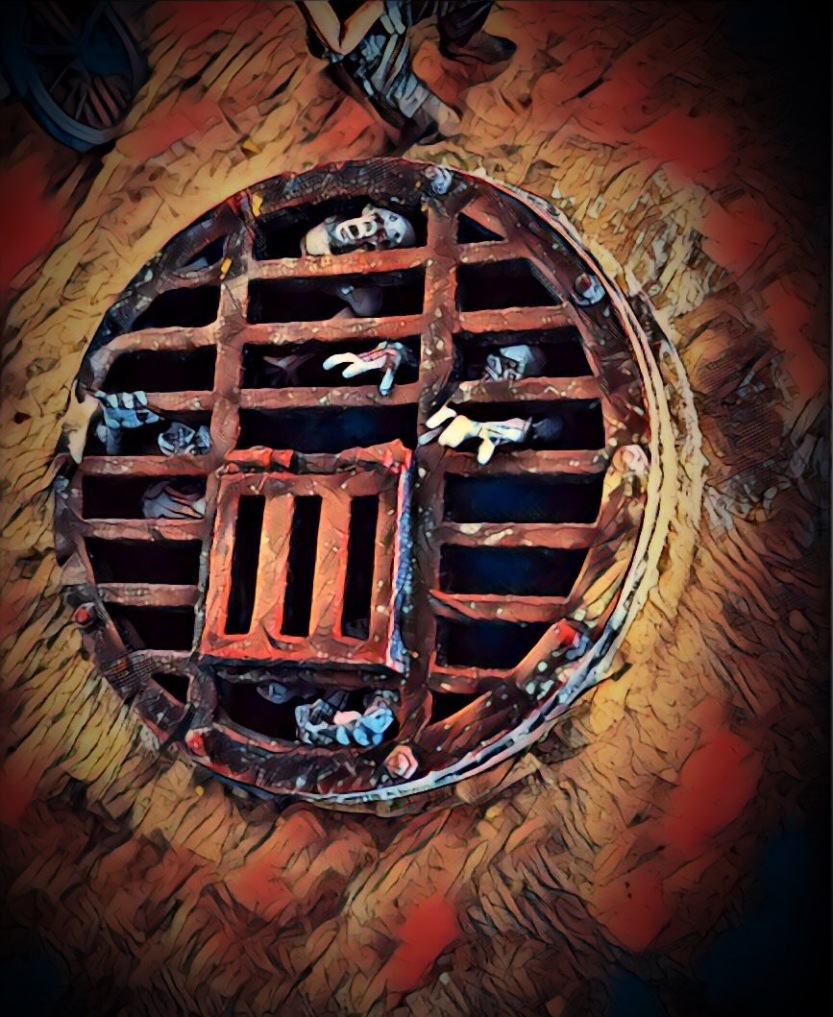 34 thoughts on “When the dust settles – Fembruary Challenge 2020”